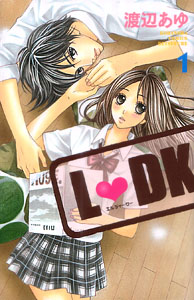 I picked this one up for both the cute cover, and the author. I have enjoyed Watanabe-sensei’s works in the past (see my summaries for Otomegokoro and Kimi ga Suki) and the characters here are in an interesting position. I was also attracted by the title, LDK, which gives a hint as to what the story is about. LDK is a term that refers to an apartment with a Living Room, Dining Room, and a Kitchen. Basically, it’s like a studio apartment. Now, seeing this cute couple on a floor together, paired with a title like that, well, yeah, my resistance is low, as usual. I do love my shoujo manga cliches. I know I should probably be more critical of the manga I read, but really, I am an easily pleased person. I can’t help it ^_^; I read so many reviews that offer great critical analysis and observations, and take manga very seriously, but I just can’t do it. This is volume 1 of a fun and fluffy story that is not at all original, but darn it, I like it anyway!

Our story opens with a situation that seems to be happening a lot in shoujo manga these days – the aftermath of a love confession. In a scene somewhat similar to the one in Koi Nanka Hajimaranai, our heroine has just confronted the most popular guy at school, expressing her anger at him for rejecting the love confession of her best friend. Our heroine, NISHIMORI Aoi, does not like the school prince, KUGAYAMA Shuusei. However, Aoi’s best friend Moe does like him, and had finally gathered the courage to confess, but she was coldly brushed off. Aoi takes her friendship with Moe seriously, and is determined to scold Kugayama for being so mean. Shuusei, for his part, is not impressed by Aoi’s attempt at defending her friend, and says some pretty rude things to her, reinforcing Aoi’s negative opinion of him. What a jerk!

Aoi is one of those shoujo manga heroines who lives with the shoujo manga plot device of “parents conveniently absent.” She lives in an apartment by herself after refusing to move with her parents and transfer schools. She doesn’t get many visitors, so she is surprised when she hears a knock on her apartment door. Ah, it is her new neighbor, bearing a moving-in gift. In Japan, it is good manners to introduce yourself and present your new neighbors with a small gift when you move into an apartment. Aoi happily accepts the gift, but then realizes who it is… Kugayama!

He looks just as surprised to see her. Wouldn’t you know it, he is moving in right next door! And, he has no parents with him to make things complicated! Aoi is totally unthrilled by this development, but can’t resist helping Kugayama when he looks so helpless and weak. It turns out he doesn’t know how to cook. By day 2 in his apartment, he looks like he is going to pass out. Aoi finds herself cooking for him, and as they may casual conversation, Aoi’s attitude towards him softens a little. Kugayama really likes her cooking, and when she sees his smile after eating, she thinks he looks like a totally different person.

But still, he is the cold prince who rejected her good friend. She can’t forget this fact! Kugayama is always being approached by strange girls. They fawn over him and even stalk him back to his apartment! These girls don’t even know him very well. Aoi can kind of understand why he would be so harsh in his rejection of Moe, another girl he doesn’t really know. While still not exactly best buddies, Aoi doesn’t hate him. In fact, she agrees to cook for him again. But this gesture is one she will soon regret.

Normally a great cook, Aoi makes a mistake, and something in her pan catches fire, causing a lot of smoke. Aoi and Kugayama manage to stop the blaze quickly, but not before the emergency sprinkler system in his apartment goes off, totally soaking and ruining his place! His apartment has been rendered unlivable, and his landlord says it will be a while until it can be restored. Oh no, what will Kugayama do?

Ahh, if you read enough shoujo manga, this should be easy. He decides to move right in with Aoi next door! Never mind that her apartment is tiny, and that they will have to lay their futons out on the floor next to each other as if they were a married couple. No way, Aoi can’t do this! She can’t live with this mean guy, a guy her best friend confessed to!? Ahh, but Kugayama is persuasive, and so their life as unexpected roomates begin. This causes no end of complications for Aoi, as she tries to keep this a secret at school. It is all very stressful! Kugayama doesn’t seem to mind as much. In fact, he appears to enjoy harassing Aoi about making a bento lunch box for him! Everyone at school starts to notice the more comfortable atmosphere around the pair. Including Moe. What is Aoi to do?