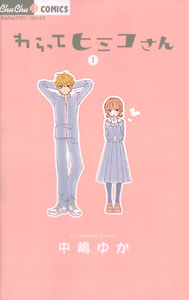 The simplicity of the cover here is what interested me in this book. It’s a bit unusual to see the main characters pictured so small, with all that space around them. I was also amused by the girl’s love-struck expression, and the boy’s happy expression. On the back cover there are funny little chibi drawings of the characters, and the girl looks like she is pouting. Very adorable! The art style or author name are not familiar to me. In general, I like the art in this book, however, it does lean a bit towards the messy side of things. However, it’s an adorable sort of messy, with some really pretty moments and some very cluttered/insane/hectic moments. The hero is always very cute, but the girl has an interesting character design, with her funny face and hair. This is a great little comedy with hilarious supporting characters and great exaggerated expressions. Himiko has a wonderful imagination which enables her to picture all sorts of ridiculously silly things. She seems to be especially fond of 70’s shoujo manga, and goes into 70’s shoujo parody mode a lot, complete with blank eyes and the little defined nose and lip 🙂

Ahh, poor Himiko. She is quite a gloomy-looking heroine. There have been quite a few other shoujo manga heroines like this lately. Girls who have an outer appearance that scares people, but on the inside they are quite different. Himiko is like that. With her funny hair and lack of social skills, she gives off a scary aura. It doesn’t help that her family is insanely wealthy, and all of her classmates call her “Himiko-sama.” But Himiko is really a very shy girl who likes cute things, and has a hilarious imagination, where she dreams up all kinds of romantic scenarios. You wouldn’t quite know it by looking at her, but Himiko is in love. The boy of her romantic fantasies is her classmate, Haruka-kun.

Haruka shines. He is cute, outgoing, friendly, loved by everyone. He is good at sports and is the star of the track and field team (he does high jump). To Himiko, he is like the princes she reads about in her romance novels. And he might as well be as far away as a prince. Even though he is a classmate, it is like they are in different worlds. At first, Himiko is content to admire him from afar.

As cute and high spirited as he is, Haruka can also be quite frustratingly clueless when it comes to romantic things. Girls confess to him, and he is usually totally oblivious, becoming easily distracted by other things going on around him. Haruka has two childhood friends – a serious guy with glasses, Shinji, and a girl named Mari. They are a bit more observant than Haruka, and are exasperated at the way he totally does not pick up on what is going on when girls confess to him. They have also noticed Himiko staring at Haruka, and it makes them worried, because Himiko’s lovesick stare is actually quite scary. She can’t be serious about Haruka, can she?

Much to Himiko’s amazement, she actually gets to talk to Haruka after a collision with him lands her in the infirmary. When she wakes up and sees Haruka there with her, she is in shock. Haruka looks so cute and worried, he reminds Himiko of her beloved pet dog at home. Haruka, with his easy-going, friendly personality, happily makes friends with Himiko. Haruka is the type of guy who doesn’t care who you are, he treats everyone the same. Himiko continues to be dazzled by him, and after becoming his friend, she eventually decides to confess to him. But can she do it? She is so painfully shy, and he is so incredibly clueless. It doesn’t help that Shinji and Mari may actually be trying to prevent her from getting closer to Haruka.

Will Himiko succeed in conveying her feelings to Haruka? Will he realize she is serious? Or will Shinji and Mari ruin everything?