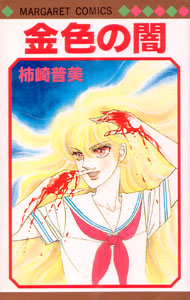 This cover! This book has such a striking cover that I just had to buy it the moment I saw it at the bookstore. You just don’t see to many shoujo manga series these days where there is someone with bloody hands on the cover. It is such an interesting visual, with the contrast between the red of the blood and the brightness of her hair. I had no idea what kind of story this would turn out to be. Horror? Fantasy? Romance? What is going on in this cover?! I had to know! However, I was a bit fooled by this cover, in that I thought the series was older than it is. The art style looks to be early 80’s, or even late 70’s (in my opinion) but in fact, this is from 1987. The interior artwork reveals more of a late 80’s style, but there are many trademark 70’s shoujo elements in the art style. This is a one-shot volume that contains 3 stories. I will spend most of my time talking about the first one, which takes up half the book.

Akira is a 14 year-old school girl. Ever since she was a little kid, she was bullied by her classmates at school because of her blond hair. She used to dye it, but her natural color would eventually show through. Others may tease her about it, but Akira loves her unusual hair. She got it from her beloved mother. Her hair is not the only unusual thing about Akira. She occasionally hears voices. There is one particular classmate, Miki, who has this irrational hatred for Akira, and has bullied her for years. Akira is usually defiant in the face of Miki’s attacks, but the years of abuse have made her pretty angry.

In one such bullying incident, where Miki was saying more bad things about Akira’s hair. Akira grabbed a pair of scissors in a fit of anger and hacked a good chunk of it off. This shocked everyone, though Miki didn’t look very satisfied. This argument really upset Akira more than usual, and she ran away to a lake located on school grounds. As she sat at the edge of a small dock, crying and looking at her reflection in the water, the anger welled up inside her, and caused her to yell that she hates everyone, and is they can all die! Oh boy, this is NOT something you should ever yell out loud, and certainly not if you are the heroine in a manga series. Suddenly Akira began to hear the strange voice that would occasionally speak in her head. It’s an awful voice, and it says awful things. She suddenly began to feel really ill, and the air sort of radiates with bad energy. Akira’s reflection in the water smiles back at her evilly. A horrifying chill wind sweeps across Akira, and suddenly her short hair is restored to its original length! Something really bad has just happened, but Akira isn’t sure what it is. She doesn’t have much time to think about it, because she soon hears some cries for help.

Farther down the lakeshore, some older boys are bullying one of their younger classmates. They have him dunked in the lake and are holding his head under water. Angered by this cruel treatment, Akira intervenes and, with a strength and ferocity she didn’t know she possessed, she punches them out! The guys are frightened by Akira’s expression and call her a monster as they run away. Oh no, a monster? When the boy she saved runs away from her too, Akira wnders what is going on. But the arrival of a new person makes things even more complicated!

A boy has entered the clearing by the lake shore. He is tall and handsome, and had earlier interfered in Akira’s fight with Miki. This boy, named MIWATARI Toru, took an instant dislike to Akira. But it isn’t because of her hair. Well, not entirely. There is something unusual about Toru, and he seems to be able to tell that there is something not right with Akira also. He also calls her a monster, but not out of fear, but instead with an attitude that indicates he knows exactly what kind of monster. He also hates her hair, and says that it is evil. But why? Toru carries a sword with him, concealed inside a harmless-looking wooden sword. This deadly weapon is sharp, and it looks like he intents to use it on Akira!

What is going on here! As the day goes by, Akira realizes things are getting weirder. There is an evil version of herself that lives within her own reflection. She can talk to this other self. When Akira’s emotions are stirred, she can cause things around her to move or explode. Is she possessed by a demon? Or is the demon her true self? But that’s not all! Other people at her school have been affected by a supernatural influence, leading to some gruesome results! What will she do? Will Toru keep trying to kill her? Or can he help her and her classmates? What is with that sword he has, it looks powerful.

This is a surprisingly violent manga that can get rather gruesome at times. There are monsters and fights and no one is safe from harm.

The last 2 stories on the book are both about high school girls who claim to be Espers, or people with extrasensory powers. In the first one, Suzuko has powers, including telekenisis. She is in love with her childhood friend Junpei who knows about her powers. However, Junpei is popular and on the school soccer team, and Suzuko doesn’t know if he returns her feelings. When an unexpected (and famous!) rival appears, what will Suzuko do?

In the 3rd story, A girl named Megumi has powers similar to Suzuko. When she gets upset, things around her start shaking and exploding! Megumi is very cute, but she is afraid of boys and hates them very much. It doesn’t help that the school playboy guy is constantly pestering her. But one day, she encounters a pair of thugs who try to force her to hang out with them. Megumi resists, but they are very large guys. Suddenly she is rescued by a handsome guy she has never met. He beats up the guys very quickly! Megumi is amazed, and realizes she is blushing! And even better, when he holds her hand to help her up, it wasn’t bad! But her habitual reaction to run away from boys causes her to flee before she can get his name or to even thank him! But she gets her chance to see him again soon, because it turns out he is the new transfer student in her class! But wait a minute, his personality is totally different! He is mean and rude, and doesn’t seem to recognize Megumi at all! But has an amazing influence on Megumi’s powers…