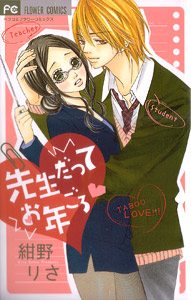 I picked up this fun little one-shot volume because it is obviously a student-teacher story. The cover conveniently labels (in English, even) the guy as the student, and the girl as the teacher. How helpful! They also throw in the words “Taboo Love.” Oh yes, that’s a selling point for me! As you may have noticed if you read through this site, I have a ridiculous fondness for teacher-student manga. It’s a guilty pleasure. Even though the stories in all of these series would never work out so smoothly if any of it happened in real life (in reality, there would probably be much jail time and psychological counseling involved, lol) in shoujo manga land, everyone tends to live happily ever after. Most of this book features the couple on the cover, but there are two short unrelated one-shot stories in here as well. The art in this book is nice. I think he actually looks better in the book than on the cover. The line art is clean and mostly uncluttered. As for the main story itself, it is nothing too original, but it’s harmless and non smutty, so I figured I might as well talk about it on this site.

So, the teacher in this story is a 20 year-old girl named ITANO Kayo. She is in the process of making her dream of becoming a teacher come true. She is about to start teaching a 2nd year English class, and she is very nervous and excited. Kayo is a small and cute girl. She looks to me more like a student than a teacher. Kayo has dreamed of being a teacher ever since she was a small child. She remembers one time in particular, when she was bullied by some boys in her class, and her teacher arrived and saved her. Ever since then, she has wanted to be a good teacher like that and to help kids.

Well, all this enthusiasm may be great, but when it comes to facing actual students, things get off to a bumpy start. On her way to her classroom, she spots a guy sneaking out of a classroom window. It looks like it’s actually the infirmary window. Hey, is this boy trying to cut class!? Angry, Kayo goes to confront him about his behavior, but her nerves show, and she doesn’t sound as confident as she should. And wow, the student is really handsome! The guy doesn’t seem intimidated by Kayo’s authority at all. Things go from bad to worse when a condom wrapper falls out of his pocket! Kayo freaks out when she sees it, and is about to yell, when the guy pulls her close for a kiss to shut her up! (oh we have a rebel boy here, hahah) He says some snarky things to Kayo about how the infirmary (a room with beds) is not only used for sleeping! Then he saunters off without a care, leaving Kayo speechless!

As this is a shoujo manga, it doesn’t matter how old the heroine is, whenever the girl gets kissed suddenly like this, you know it’s her all important FIRST KISS that was just stolen! What a way to start a teaching career! When she finally gets to her class, things don’t get any better. Kayo is an innocent type of girl, very small and gentle and cute. The rough high school girls with their sexy clothing, and the rude guys make her nervous and upset. She tries to start class, but her students don’t listen, and she is too timid to do anything. And even worse, that rude guy from before is in her class!

To Kayo’s surprise, he actually helps her gain control of the class when he yells at everyone to shut up (he’s trying to sleep). This helps her make it through the rest of her class, and allows her to finish her awful first day. The guy is named Takato-kun. He seems rude and obnoxious on the outside, but he actually manages to help Kayo out several times. But that doesn’t prepare her for the sight of him waiting for her outside of her apartment when she returns home that evening. What is he doing there? How did he know where she lived? Wait, what? He is the son of her mom’s friend? It looks like his parents are on a trip for the week, and it has been arranged for him to stay with Kayo!

Living together? With this boy! He’s 17! She’s 20! Not much of an age difference there… What will happen with these two living under the same roof? Plus, they are teacher and student! With his perverted and flirty attitude, Kayo’s crazy days are just beginning!