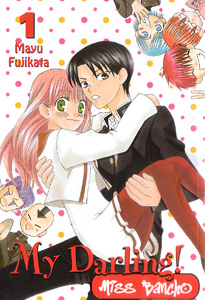 I was very happy when I heard that this series was going to be licensed, because it is a fun and sweet little story that deserves more attention. I own this series in Japanese, but when CMX sent me a copy of volume 1 of the English release, I decided to finally talk about the series here and compare this to the Japanese volume. This is what the Japanese version cover looks like. As you can see, the US release uses the same cover art, but the arrangement is slightly different, and of course, the Hana to Yume frame is gone. The characters in the background have been shifted a little bit so they can be better seen and not blocked by our main couple. The back cover features a very colorful picture that matches the picture used in the inside flap on the dust jacket of the Japanese version.

This is the story of a high school girl named HIRAYAMA Souka. Her parents recently divorced, and she has decided to live with her mom. Because they now just have the mom’s single income supporting them, Souka decides to help her mom out by not going to an expensive private school, and instead begins classes at a local technical/trade school. She figures that she will quickly learn a skill, graduate, and get a job to help her mom earn money to support them. It’s a noble thought, but one that she did not quite research thoroughly.

On her first day of school, Souka notices something is not quite normal about her new school. There are no other girls there! Usually when this happens in manga, it’s because the school only just recently became co-ed, but in this case, it’s because the boys are so awful that all the other girls transferred out! In fact, all the guys in her class are rather scary looking!

Now, it’s not like Souka is a tiny, delicate, wimpy girl. And she isn’t a tough tomboy, either. She is an average girl, who is cute and hard-working, and likes girly stuff. Being around all these delinquents is intimidating, and she has second thoughts about staying at the school, but she made a decision to help her mom, and she sticks to it.

The translation indicates that the battle is between the “sophomores and the seniors” but in the Japanese version it’s between the 1st years and the 3rd years. I guess that makes sense, as high school is 3 years there, so the equivalent grades in the US would be 10th and 12th. The leader of the boys in her class (she is a 1st year) is a guy named KATOU Yuuji. When Souka first meets him, he appears quite frightening. He has the typical look of a high school gangster type, with his hair slicked back on the sides and various cuts and dirt on his face indicating he’d recently been in a fight. However, when Yuuji sees Souka, his behavior is the exact opposite. He’s actually really nice and thoughtful!

Only in manga can the tough delinquent guy actually end up being a science genius with a mothering personality. In real life, he would probably be a druggie loser who steals iphones from people on the bus or something. I am generalizing horribly, of course, it just seems like in manga, these guys always have a heart of gold 🙂 Yuuji (called Yuu-chan by his friends) is their boss in fighting, but he is also like the parent when it comes to keeping the other guys in line. He takes Souka under his wing and fusses over her. He realizes that the school is dangerous for her, and gives her some things to use help her defend herself.

As the leader of the 1st years, Yuuji is always fighting with the school “bancho” or the acknowledged gang leader of the school. (well, that guy likes to attack Yuuji. Probably can tell he’s a threat). Well, wouldn’t you know it? During the fight, Souka tries to protect Yuuji, and through sheer luck manages to knock out the bancho!

The rules of the school dictate that whoever defeats the current bancho takes over that role. Since Souka was the one who knocked him out, she is now the new bancho! A girl is the school’s “boss!” What an unexpected development for her! While the idea of this girl being a gang leader is ridiculous (most of the guys can beat her up, obviously) there is an honor system in place where the title earns her a measure of respect. Plus, some of the guys are reluctant to hit a girl 🙂 But Souka’s new role means she may be in constant danger. Fortunately, Yuuji is willing to step in as Souka’s bodyguard!

Will Souika be able to survive life as a gang leader in a school full of boys? How long will she keep her status? Will someone challenge her for it? Poor Souka has a hectic time ahead of her!

This is such a fun, adorable series. The pace is fast, and the art is a bit busy at times, but it’s silly and cute, and gives me a warm impression when I read it. This is a simple series, not out to be anything sweeping and epic, yet highly enjoyable. Souka is a cute girl who can be unexpectedly willful, and isn’t afraid to take risks and make decisions. She wil help her friends without worrying about herself. Yuuji is a cool guy who is not mean or abusive. He’s sweet and caring, yet can fight well 😀 The supporting cast is colorful and works well as comedic relief. I really enjoyed reading volume 1 in English after only reading it in Japanese before. I look forward to volume 2!

Volume 1 can be purchased in English HERE!