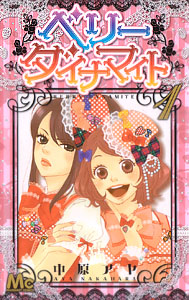 I am a big fan of NAKAHARA Aya’s works. I have discussed a few of them here before. They are cute and fun, and she usually has an interesting twist to a situation, or she uses character types that I prefer. This is a series about idol singers, so that attracted me right away. When I first started reading this series, I went a little crazy because it was SO FAMILIAR. I knew I had read most of the first chapter somewhere before, but I couldn’t figure out where. I don’t read shoujo scanlations, I haven’t bought any manga magazines lately, and this series isn’t licensed, so it took me a while to figure it out. Then I realized that this was a series I previewed over on Shueisha’s site. Shueisha has a nifty online reader that allows you to read the first several pages of nearly of their Margaret and Ribon titles (in Japanese). It is a wonderful site that helps me decide on some of the books I look for when I go to the Japanese bookstore. I was so happy when I figured it out! I swear, that was poking at the back of my mind for so long, driving me batty 🙂

The star of the story is Mai, a 15 year-old girl with a big dream. She loves music and singing, and wants to be a rock star. When Mai got her big break, she couldn’t have been happier, until she realized that she wouldn’t exactly be performing the rock songs she dreamed of. Mai made her big debut, but as a pop idol! And not just any pop idol, but as one half of a duo called Star Berry, a super cutesy act that quickly becomes known for its frilly ruffled dresses, ribbons, bows, and adorable songs about nonsense.

Mai and her partner Kurumi are cuteness personified. They sing and dance in unison, and end all their sentences with the word “-berry.” Mai is a trooper, and goes along with the act with great stoicism, however, she is dying inside. She wants to be a rock star, not an idol! Kurumi is a great girl, but her cuteness is cloying and she keeps making Mai wear and say all these ridiculous things! Mai is embarrassed by her idol life, and even contemplates quitting. Sure, that would make Kurumi sad, but Mai wants a real career!

There is a talent agent Mai wants to audition for. The agent is known for creating huge stars. Mai thinks that if she could just leave Star Berry and sign with her, all her problems would be solved. But of course, things will not go as planned. How will Mai survive living in the world of idols when she has the heart of a rocker? She has some support from Kurumi, and from a devoted fan who works at a convenience store. He is unexpectedly cute and is a great source of encouragement for Mai. But the life of an idol is rough. Good luck, Mai!

This is a funny series. The juxtaposition of Mai’s serious rock dreams and her fluffy cute reality is hilarious. Kurumi is so innocent, earnest, and straightforward, it’s hard to hate her, even when she is designing stupid frilly strawberry costumes. Mai’s reactions to all the horribly sugary cute things that idols have to wear and do is priceless. I can easily sympathize with her. As for romance, Mai begins the series with a boyfriend, but things there take an unexpected turn. (it involves cat ears!) I have a feeling volume 2 will take a more romantic direction. I look forward to it!