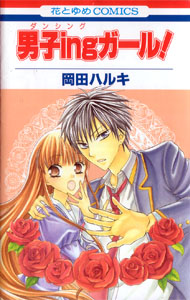 How about a little gender-bending fun? I picked up this book because I’m always happy to see a new Hana to Yume title that I don’t already own at the bookstore, and the title of this book suggested a pretty silly plot. The title is a painful pun. On one hand, when spoken out loud, it sounds like how the English phrase “dancing girl” would be pronounced in Japanese (danshing for dancing). On the other hand, instead of using katakana to spell out a foreign word like dancing, they use kanji used to spell out the ‘danshi’ part of the word. That kanji for ‘danshi’ also means ‘young man’ or ‘boy’. So we have a boy-girl type of title, woo hoo! So yeah, I suspected there might be some gender fun in this book, and yep, there sure is! This book contains 5 chapters, all involving the same story (no unrelated side stories). I am kind of sad that it ends at 1 volume, because I think the story could still be interesting for another volume or 2. There are more plot twists that could be explored. As it is, the first chapter of this book feels very stand-alone, like it was intended to be a one-shot, but was then so popular that the publisher/editors asked the author to make more, so the rest of the chapters that fill this volume were added. I have no idea if that is true, but that is how it feels. The art here is really pretty. I don’t recall having seen anything else by this author before, but I look forward to more, because the art style is so clean and cute. This is a fun, non-smutty fantasy gender-bending romance story, that can almost be considered to be boys love also.

The leading lady of this story is a pampered, wealthy girl named Karin. She is small, cute, and absolutely terrified of guys. She hates them! Thanks to some early childhood trauma where some boys were mean and bullied her, she can’t stand to be around them, and does everything she can to avoid them. Unfortunately for Karin, she is about to get closer to a boy than she ever imagined she could be. One day while walking home from school, Karin drops her lace handkerchief. It floats on a breeze and lands in the middle of the street. Just as she turns to get it, she sees a boy there, picking it up for her. They lock eyes for a moment and everything freezes. Um, but there is one small problem — they are in the middle of the street, and directly in the path of an oncoming truck! (doh!)

When Karin wakes up, she finds herself in unfamiliar surroundings — a boy’s bedroom! She is horrified! Even worse, there is a strange guy leaning over her, waaay too close! Karin panics, but the guy looks fairly calm. For some reason, he keeps calling her ‘Yuzu.’ What’s up with that? It doesn’t take Karin long to realize why — she is not in her own body! For some reason, Karin has ended up in the body of that boy she saw on the street, an outgoing and cute high school boy named Yuzu! And this guy in Yuzu’s room? His name is Kuga-kun, and he is Yuzu’s best friend. This would seem like an outrageous circumstance, one that she would never be able to explain to Kuga, but the arrival of a shinigami soon helps to clear things up.

Yamada-san, the shinigami, helpfully explains to both Karin and Kuga, that there has been a little mistake. His job is to escort souls to the spirit world for judgement after they die. But Karin and Yuzu weren’t actually supposed to be on his list of souls to take, and in his rush to correct his mistake and return their souls, he put them back in the wrong bodies. Whoops! So somewhere out there, Yuzu is inhabiting Karin’s real body! Naturally, Karin is shocked and demands that Yamada return her soul to her rightful body, but alas, Yamada is just way too worn out, and doesn’t have the strength to do something like that. Maybe he’ll be able to after a little vacation (to Hawaii…). With a cheerful wave, he departs, leaving Karin stranded in her own personal hell- a boy’s body.

As for Kuga, he takes in all this craziness with remarkable calm. He sympathizes with Karin, and offers to help her out. Karin is so amazed and grateful. Kuga is nothing like any of the other boys she has known. So begins Karin’s new life as a boy! Given her boy-hating personality, this leads to some fun situations, especially considering that Yuzu and Kuga attend an all-boys school (horrors!). Karin may outwardly appear to be the boy, Yuzu, inside she is a ‘ojou-sama’ pamered rich girl who is definitely not outgoing and fun like the real Yuzu. At school, everything is awkward as she reacts and recoils like a girl when around her new classmates. But Kuga is a great help. He is so caring and understanding. He is the one boy that Karin things she can trust… ahhh why is she blushing!? And wait, is that Kuga blushing too? Oh this could be even more awkward, considering that to an outside observer, he is blushing in front of another boy!

How long will Karin have to endure this boy’s body? When will Yamada return (will he?). And what about Karin’s body, now inhabited by Yuzu? What exactly is he up to? Could Karin and Kuga ever get together? Their relationship would be unusual, to say the least. Is it really a boys love situation?

I liked how this book turns out, but I still think the situation could have been explored for another volume at least. Karin is a funny character, and Yamada the shinigami is unexpectedly entertaining. Kuga is a sweetheart. I look forward to more series by this author.