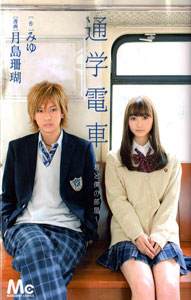 I generally don’t buy manga volumes or manga magazines that have pictures of models/actors/real-people on the cover. I’m not sure why, but they usually annoy me. There are lots of random manga out there with photos of whoever the current popular idol singers are. I always pass them over. The only reason I actually ended up getting this book is because of a preview chapter posted on Shueisha’s s-manga.net website. Once again, hooray for free previews! I’m glad I looked at it, because the first chapter was enough to hook me, and I had to find out what happened next. I didn’t even realize until after I started reading it that I already have other manga by TSUKUSHIMA Sango, and that I have actually already talked about 2 of her other series on this site! That’s what I get for judging a book by the cover! This is a cute one-shot volume. I believe it is based on a keitai/cellphone novel that won a contest and was also published as a book. The same models posed for the cover of the book.

This story has a familiar setup. Yuuna is a second year high school student who has to take the train to school. There is a boy she likes, but she doesn’t know much about him. She sees him a lot on the train, and can’t keep her eyes off him. All she knows is that he is also a 2nd year high school student (at a school in a neighboring area) and that his friends call him Haru. As far as Yuuna can tell, he doesn’t know she exists, but one day that all changes when their eyes finally meet. Yuuna, as usual, is staring at him as he dozes on the train. But when his eyes suddenly open, she is unprepared, and can’t look away. Their eyes meet for the first time. Yuuna immediately flees the train, but she is still shaken up. Now, it seems kind of silly to have such a huge reaction after such a simple thing as making eye-contact, but at least now she knows he knows she exists! Her friends thing she is being silly over such a small thing, and Morishita, a classmate who has an obvious crush on her, acts cheerful as usual. But Mizushima-san, a tall, elegant classmate (a “cool beauty”), has an unusual reaction. She is quiet as usual, but she has a strange look she gives Yuuna that makes Yuuna bewildered.

But this is just the beginning of Yuuna’s bewilderment. Things are about to get a lot stranger. That night, she goes to sleep with thoughts of Haru filling her head. And when she wakes up, she is confronted by Haru in her BED! Well, hello, Surprise Bishounen! Yuuna is shocked. How did he get there!?!?!? Is it really him? Well, it certainly seems like it! While he isn’t freaking out as much as Yuuna, he doesn’t have any idea how he ended up in her room, in her bed. He is acting amazingly calm, considering he doesn’t know who Yuuna is. However, he is friendly and nice to Yuuna. You’d think he made a habit of sneaking into the beds of sleeping girls! 🙂 Now Yuuna knows that having a boy in her room will be a serious problem, Haru has t get out of there! Only… he can’t! When he tries to leave, he bounces off an invisible wall blocking the exit of her room. What the heck!

Even more baffling, Yuuna’s mom has no problem entering Yuuna’s room, and she has no reaction to Haru’s presence. She can’t see him! So, wait a minute, is Haru there or not? Yuuna is the only one who can see him. Is she going crazy? Is her crush on the boy making her hallucinate? Or is it something more sinister — is Haru dead, and haunting her as a ghost? Speculating won’t solve the problem, so Yuuna leaves Haru in her room, and heads off to school.

But, as she does every morning, she sees a familiar face on the morning train…. Haru! How did he get there?! If Haru is here on the train, then who is the friendly, outgoing boy in her room? Is Haru a twin? Are there two people with his face? This Haru on the train helps Yuuna escape a groper, but other than that, he shows no signs of recognition, and looks at her coldly when she greets him informally by his name before he can introduce himself. Her reaction to him, as if she knows him, creeps him out, and he thinks she is a stalker!

Poor Yuuna is in quite an unusual situation! There are two of Haru, but one of them is mysteriously trapped in her room, and the other one seems to hate her. She doesn’t know how they are related, but she can’t seem to get rid of the Haru in her room. Which is the Haru she fell in love with? Their personalities are so different! Haru at home is cheerful, loves soccer, and talks a lot. The HAru on the train is cold, suspicious of Yuuna, and might even have a girlfriend! It’s a lot for Yuuna to sort out! Even more mysterious, is that her classmate, Mizushima, seems to somehow know something strange is going on with Yuuna. How could Mizushima know anything?

Even though this series employs some classic shoujo manga plot devices (falling for the guy on the train, surprise bishounen) I really liked the mystery of the two Harus. Yuuna is a decent heroine – not too ditzy or lovesick. I wish I was fluent enough to read the book; I’m curious to see how it differs (if at all) from the manga. Unfortunately, my Japanese reading level is pretty much limited to shoujo manga 🙂 Ah well!