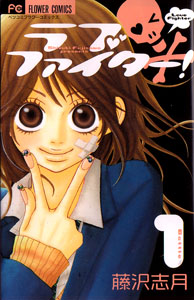 I admit that I really only bought this one because it has an eye-catching cover and, at the time, there wasn’t anything else new at the bookstore that I didn’t already have or was interested in. 🙂 This turned out to be a fun purchase. It’s a cute story, if not exactly the most original. I do look forward to the next volume.

OOGAWA Nami has liked SAKURAGI Haruka since a day in junior high when she attended another school’s festival day. They had a haunted house set up, and while inside, Nami got lost, then scared, and then totally panicked when something cold and slimy touched her cheek. In her terror, she bumped into the haunted house walls, and knocked a number of them over! It was such an embarrassing moment, but fortunately she was helped out by a cute young guy who appeared to be a student at that school. He was the one who had dangled the slimy object in her face, scaring her, so to make up for it, he helps her out of the haunted house.

Nami is struck by how nice and gentle he is and how easy on the eyes he is. She pretty much falls in love on the spot, and vows that she is going to attend the same high school as this boy! The festival was held at a middle school that is connected to a high school and the students there are pretty smart. But with fierce determination, Nami studies hard and makes her dream come true. She is admitted to the high school, and now she can find the boy she loves!

She finds him much faster that she expected. His name is SAKURAGI Haruka, and he is at the top of the class, and delivers the welcome speech to all the incoming first-year students. Nami is struck again by how wonderful he is, but her new friends don’t seem as excited about him as she is. This doesn’t matter though, and in fact, the first time she runs into Haruka, she even blurts out the first thing that comes to mind when she sees him- “I like you!” But Haruka only looks at her coldly and without recognition. Instantly, he rejects her, and Nami is crushed!

Where did the kind boy in the haunted house go? This guy is a cold-hearted prince! Rejection doesn’t sit well with Nami, and she reacts angrily, vowing to not be defeated by him. He will fall for her! A challenge has begun! Haruka wishes her luck, but is not impressed by Nami’s enthusiasm. She is such a weird girl!

Haruka isn’t at all like how Nami remembered him. It turns out he has a long track-record of rejecting love confessions. He even has one of those fan clubs that I hope only exist in shoujo manga, where there is a large group of girls who all like the same guy, but they have vowed that he belongs to everyone and no one. They are not thrilled to see Nami being so forceful. With a cold guy rejecting her, and an army of girls against her, how can Nami ever win her challenge? Is Haruka really as mean as he seems?