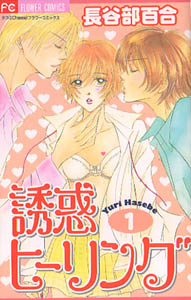 Ahhh, cheesy shoujo manga, I just can’t resist it! I first started reading Yuuwaku Healing when it was running in Cheese magazine. I have read one of this author’s other works (My Darling Lion) and enjoyed it, and I was quickly addicted to this really silly story. This series fills 3 tankoubon, so it is not that huge of a commitment if you are looking for a short, cheesy series to collect. No, this is not something you can really take very seriously. It’s very much shoujo fluff. But I’m a sucker for that stuff. Yuuwaku Healing has love triangles, family rivalry, and possibly a threesome? Ooh! I like it when series have threesomes ^^;;;;

16-year old Miu has a problem. She loves her boyfriend Nagisa, but for some reason she just can’t respond to him romantically. There is no spark when they kiss, and she can’t bring herself to have sex with him. She doesn’t know why, every time she gets close to Nagisa, she just can’t go through with it, even though she wants to. Nagisa, for his part, is a sweetheart. He is totally patient with Miu, and will not pressure her into anything she does not want to do. If she wants to wait, well then so will he, because he loves her. (Awwwww) However, things for Miu change one day on the way to school when she is crushed on a crowded train on her way to school, and she encounters a really handsome guy, who helps to steady her and shield her from the crowd. She doesn’t get his name, but wow, her heart pounds just being around him, and for the first time she actually feels aroused! Miu is understandably shocked by this but unfortunately she doesn’t know who her mysterious savior is.

Of course, this being a shoujo manga, she soon finds out! When she gets to school she ends up going to the school doctor’s office, only to discover that their old doctor is gone and the new one is (you guessed it) the guy from the subway train! Miu nearly swoons at seeing him, and being around him again starts making her feel weak in the knees! Such a reaction! Miu, confused about her sexual response to him, begins to tell the doctor all about her problem with her boyfriend Nagisa, about how she can’t really feel that ‘spark’ around him. The Doctor is very attentive to her problem, and he seems interested in Miu as well! Ahh, here we have a possible love triangle… Miu, the doctor, and her boyfriend Nagisa. Oh, but wait, lets throw in one more complication! This new doctor, (his name is Ujou) is none other than Nagisa’s father! ACK! Oh boy… Ujou, knowing that Miu is Nagisa’s girlfriend, takes it upon himself to help Miu get over her problem…. hehehehe ^_^