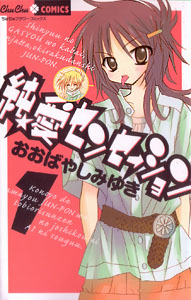 Title: Junai Sensation (Pure Love Sensation) Author:OOBAYASHI Miyuki ISBN# 978-4-09-131805-3 ChuChu Comics, 2008 Oh wow, this is a rarity- a series that I didn’t buy because of the cover! Amazingly enough, I picked this one up because the story sounded interesting. In fact, I don’t really like the art all that much in this series. It is a bit too angular, with bad body proportions and profiles. Yet, I still enjoyed and recommend this series because the story is a lot of fun. This could almost be classified as shounen ai, but it side-steps it on a technicality 🙂 I am not sure if I should classify this as cross-dressing (I don’t have a gender-bender category) or shounen ai. Hmm. KIMURA Junichi is a popular guy. He is cute and carefree, and he plays with/teases all the girls. He is the type all the girls squeal “kyaaa! Kyaaa!” for when he comes around, and he shamelessly enjoys the attention. He is also good at fighting, and he never seems to take anything seriously. His best friend is a guy called Gashou. Gashou is a little bit taller, a bit more serious, and is also a ‘legendary’ fighter. Even though Junichi and Gashou are best friends, there is a lot of friendly rivalry and fighting between the two as they compete for things and joke around and insult each other. Junichi likes to tease Gashou, and their roughhousing and competitions with each other in the Judo club are very entertaining. For Junichi, Gasho is very important to him. Even though they fight and argue a lot, he thinks Gashou is the most interesting person he has ever met. In fact, he strangely begins to feel unhappy when he sees Gashou borrowing DVDs from someone else, or talking with a female classmate who seems to like him. He begins to feel even stranger when Gasho later explains how he believes there is one girl out there her is destined to fall in love with. He hasn’t met her, but he knows she must exist. Why does hearing this make Junichi feel so bad? So.. jealous maybe? Junichi doesn’t get to ponder this for all that long. One evening when the two are walking home together, Junichi sees a car speeding towards them. Instinctively, he pushes Gashou out of the way, and he is hit straight on. Junichi dies! But this is not the end for Junichi. His spirit hovers above the scene, and has not left this earth yet. In the days following his death, Junichi discovers he can still see Gashou and everyone, but they can’t see him! It is very strange to watch your own funeral. Gashou’s depression at losing Junichi is obvious, and Junichi wants to be with him. Amazingly enough, he is about to get his chance. There is a girl on the roof of their school! Not just on the roof, she is standing beyond the fence, out on the edge! She looks very unhappy, and before Junchi can stop her (as if she would be able to see him anyway) she jumps! Junichi panics and tries to stop her fall, and ends up possessing her body! Wait, what!? The girl lands safely, and Junichi finds that he is now in the body of this girl. And his first thought? Maybe he could be the girl destined for Gashou… (Of course!) What follows is an amusing gender-bending story. Junichi discovers he is not alone in his new body. The girl, Ai-chan, is not dead! So now Junichi is sharing a body with this girl. Why did she try to kill herself? Can Junichi reach out to the grieving Gashou? What will Gashou think of this girl Ai-chan who seems to have very different personalities? And poor Ai-chan. What is this strange voice she hears in her head?