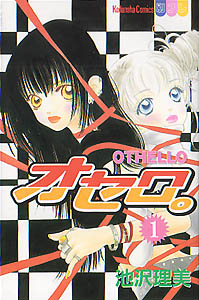 I picked up this manga after reading a brief description of it on Kodansha’s website. I though the art style was cute, and the story sounds interesting. And indeed, the art is very pretty. It feels so… shoujo ^_^ It’s light and airy, and the female eyes are large and sparkly. I love how this author draws the gothic clothing too 🙂 I feel kind of sorry for the heroine though, and I wonder how this series will end. I keep wondering if the men in white lab coats with straight-jackets are gonna show up ^_^;;

This is the story of Yaya-chan, a very lonely and depressed girl. She has no real friends (those she does have pick on her a lot) and her mother passed away when she was little. She lives with her father, who is very over-protective of her, and doesn’t let her stay out late, so she has no social life. She has always been picked on by her classmates because of her silly name, and her shy personality doesn’t help much. She is easily intimidated. She does have one means of escape from her depressing reality. She is a big fan of visual rock music (especially a band called ‘Juliet’,) and after school some days she likes to go to Harajuku and cosplay as a member from a visual rock group. It’s a very goth look, and Yaya looks very cute! Things sort of look up for Yaya, when a cute classmate of hers, a boy who is the lead singer of a band, befriends her and tries to get her interested in some of his favorite music, including Led Zepplin. However the story takes a strange turn, when Yaya finally cracks under the constant harrassment. She is being attacked by some boys in a karaoke club one day when Yaya finally just… changes. In the blink of an eye, a new personality emerges. She is now ‘Nana’ and she is tough, confident, and in charge. Nana can do things that Yaya could never do. Nana beats up the boys and takes care of all of Yaya’s problems. How will Yaya live with this new, super-confident alternate personality? Who will be the dominant one, and who is the REAL Yaya?

This series has been licensed for release in English in the US! It can be purchased HERE!