I have a small but growing collection of shoujo manga from the 1970’s and the early 1980’s. While I have just barely begun to scratch the surface in terms of reading older shoujo manga, I HAVE noticed a few common styles about them so far as I go through my books. I am not even remotely an expert on this subject (that would be Matt Thorn, lol), but I have decided to have some fun and post a few of those styles here.

Seriously, I think it must be true. A huge majority of the retro shoujo manga that I come across features cute blond heroines. Occasionally we will get a girl with light brown hair, or a darker brunette, but a heroine on a cover with black hair seems to be quite unusual. At least, judging on my tiny sampling of old manga. Who knows, perhaps there is a giant treasure trove somewhere of titles featuring black-haired heroines, but I have yet to find it. Just look at my gallery below — you’ll notice the strange abundance of happy blonde girls.

Not only are so many retro shoujo manga heroines blondes, but they also have majestic fancy hairstyles, usuallly involving curls,large ringlets, and hair ribbons. If it isn’t the pure, innocent heroine, then it is the bitchy bully girl who will have this hairstyle (she will also do the obligatory ‘oh ho ho ho’ laugh). At any rate, there is always at least one character who has hair like this. If it’s a sports manga (volleyball, tennis, etc) or daily school life plot, then it is the rival or popular girl who will wear the curls. If it’s a European Orphan Looking for Her Family/Love type of plot, it will be the heroine who has them. These hairstyles work nicely with all the frilly European-style dresses they all wear out in the Alps or whatever foreign country they are enduring their tragic hardships in. 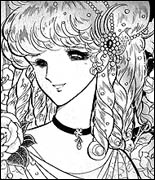 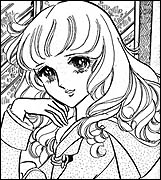 Even in my small collection here, you can see some crazy tongue action going on. It seems to imply mischievousness, determination, or an “Oops! My Bad!” situation.

Wow, with the amount of sparkles and stars and eyelashes these characters have, it is amazing they can even see! I like to call this “Galaxy Eyes” since it seems like some characters have enough stars in their eyes to create a galaxy. Personally, while I think a few glimmers are cute, the overabundance of sparkles is overkill. Everyone looks like they are crying. Another common type of eye sparkle is the “window to the soul” square shine mark. These are so distracting to look at. They sort of look like soulless pits of despair. 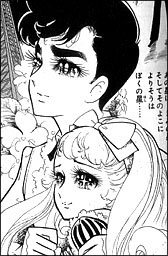 5. The Defined Nose and Lip

For me, this (along with Galaxy Eyes) is the most noticeable style point of older shoujo manga. I can always tell in modern manga when they are parodying 70’s shoujo when a character will suddenly have this defined nose and lip. In the nose, it is a little line right at the tip to define the edge. On the lips, it is a little line that defines the top lip. It is present on both heroes and heroines. I am not sure why, but through the 80’s, these lines gradually disappeared. 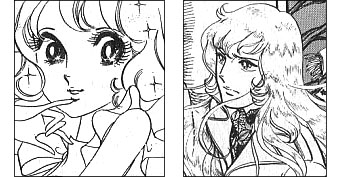 6. Seeing and Eating Stars, and that Creepy Vacant Look

No, I am not talking about Galaxy Eyes again. This time I am referring to the phenomenon of stars (not sparkles) replacing character eyes and stars or hearts appearing in a character’s mouth. This usually happens when someone is surprised, or struck with a feeling of love. In particular, the hearts in the mouth thing seems to be an expression of love. I don’t really see this any more. Also, a great way they used to express a character being in shock (in a totally creepy way) or being extremely angry is to completely remove the eyes so there are just two empty sockets. 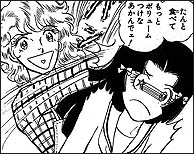 As for the plots of 70’s shoujo manga, well, just as it is today, there are plots involving everything under the sun — cute daily life romances, angst-ridden private-school melodramas, high-tension sports stories, etc. However, I will say that older manga seems more emotional to me. The characters react more strongly to every event. There are shocked poses and dramatic backgrounds, and facial expressions become exaggerated. I think it took itself more seriously? The pages seem to be packed with more panels and more dialog. It takes me a lot longer to get through an older book than a more recent one.

It is always fun to see a modern anime or manga series reference the 70’s shoujo manga style. For example:

Here Kanako from Maria†Holic goes into total 70’s shoujo manga mode! Note the colors, the nose and lip, the scribble across the nose and the galaxy eyes and the bonus star in one eye! Then again, Maria†Holic is almost a parody of a typical old 70’s shoujo yuri girls school sort of thing. Unlike Maria-sama ga Miteru, which pretty much takes itself seriously, Maria†Holic has a lot of fun with the old-school style and situations and blends them with modern anime styles.

Anyway, below is a gallery of my small 70’s shoujo manga collection. Hmm, most of what I have is from the late 70’s, and I have a few from the early 80’s added in here as well. You’ll notice they all have a similar sort of style. As the 80’s went on, this style changed quite a bit. By the late 80’s and early 90’s, hair started getting… fluffier and wispier, clothes became baggier or more sloppy, and coloring styles became more loose. Like, instead of solidly filling in lines, colors bleed around the edges more and have an airy feel to them. I will have to eventually make a gallery showcasing that style too 🙂

no images were found