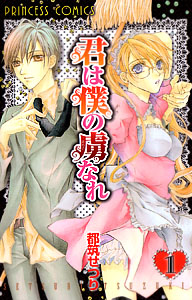 I picked this manga up because of the artwork. Not so much the front cover art, which is nice enough, if a bit maid-fanservicey, but for the back cover art. It is just a cute picture of a guy at a table piled with desserts. There is a strawberry cake on the table that has been cut open in a very messy way, and there is a bit of a cake mess. The maid is standing next to the table, brandishing the cake knife. I don’t know why, but there is something about the way the picture is colored that I really like. The cover art is okay, too. Actually, this is one of those books where the interior art is actually nicer than the front cover. So often the cover artwork will be really gorgeous, and then when I buy the book I am stuck with awful art inside. The bookstore I buy manga from shrink-wraps everything, so I have no way of telling beforehand how things will look. In this case, the artwork inside is very clean and detailed, and the screen tones are used in pretty ways. As far as I know, this series has 2 volumes out, and is still running. This is an action/comedy, with a little fanservice, but nothing too obnoxious.

This is the story of a very wealthy boy named Tomoe. He, in spite of being the illegitimate son (not to mention the youngest son too), is the heir to a very large wealthy family empire. In order to protect Tomoe, his father has employed a set of very unusual bodyguards. In particular, we have KAZURAGI Shii, a very cute, busty, and clumsy-looking girl who works undercover as a housemaid. Shii is 17, has long hair that is worn in pigtails, and she wears the traditional (and currently popular-fetish) maid costume. By day, she acts very cute and bumbling, and is not really a very good housemaid. She doesn’t really know her own strength, and in her enthusiasm to help Tomoe, she will often make a mess or destroy household things.

Tomoe’s relationship with Tomoe is interesting. She is also not very respectful towards him and treats him casually. He thinks her personality is very shallow, and does not think much of her. In fact, at first, he would rather she just go very far away. You see, in the beginning, Tomoe does not know that Shii is a bodyguard. She acts so silly that Tomoe can’t take her seriously. He is cold to her, and rejects any attempts she makes to be friendly. Yet Shii has an innocent, caring quality, and a quirky violent side, and Tomoe slowly warms up to her.

However, the moment there is any danger to Tomoe, Shii’s personality changes completely. She springs into action, displaying some scary-good fighting skills. She will not hesitate to use anything around her as a weapon, including her broom, which is a little bit more deadly than your average broom. Shii becomes confident, daring, and very kick-ass when she is in fighting mode. Tomoe’s first reaction to Shii’s other personality is mild surprise. He seems to handle everything going on around him (the crazy butlers and maids in his household, Shii’s antics, violent attacks by jealous family members, etc.) very calmly and without any undue panic. Kidnapping or life-threatening situations seem to happen to Tomoe a lot, ever since he was made the heir, but now that Shii is around, perhaps he won’t be so unfeeling and willing to die.

I like how this series is told mainly from Tomoe’s point of view. There aren’t all that many shoujo series that feature the guy as the main lead. The art is detailed and attractive. The comedy is sarcastic and absurd. Shii is cute, and makes things more interesting for Tomoe. Each chapter has Tomoe’s life being threatened somehow, and Shii works hard to protect him. Even though she has amazing fighting skills, she is actually not perfect, anSlowly they become closer, and Tomoe begins to change…