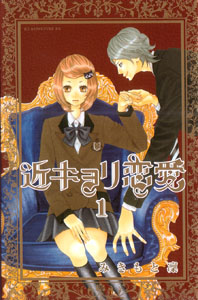 I am so happy I was finally able to start this series! This is one that I had wanted to read for a long time, but my local bookstore only had volumes 2 and 3, no volume 1. I made sure to check every time I went, but alas, it was never there. I know I probably could have special ordered it, or ordered it from somewhere else online, but I have a tendency to spend lots of money when I do that, so I resisted 🙂 And my patience was rewarded when I finally found this coveted first volume on the shelf! Of course I grabbed it, so now the next person browsing the shelves will be stuck waiting for volume 1 (muwahah). Anyway, the reason I was so interested in this series is because the cover art on the three volumes that are out so far is really pretty. I like the Old-English calligraphy style applied to the kanji in the title, and the coloring is nice. Oh, and I should mention that this is yet ANOTHER teacher-student series. I KNOW! My guilty-pleasure! I can’t help it! Really, I am so NOT picky when it comes to shoujo manga. I am so easily entertained.

Anyway, looking through this book, I can see that while not *quite* as cute as the cover, the interior artwork is nice as well, though this artist does do some strange things when drawing lips. Actually, the art in this series sort of baffles me. There are times when it is really bad. The first full shot of the teacher has some crazy proportion problems (his torso is like, 3 miles long) and there are some really bad profile shots and other weird angle stuff. But then there will also be some really really pretty artwork, usually straight-on views. The eyes are also really pretty. So basically, the artwork here confuses me 😀 Still, the story, while using evvery teacher-student cliche ever, is really cute 😀

Our heroine is a nearly-perfect student named KURURUGI Uni. I say NEARLY perfect because she scores a perfect 100 in all of her classes except for one. That one troublesome class is English, and one source of Uni’s problems is her new substitute teacher, SAKURAI Haruka. Well, ok, Uni has had problems with English for years, but Haruka-sensei’s teaching isn’t helping any. This is extremely troubling for Uni because she is a serious, perfectionist type of girl. She is very pretty and always speaks and acts very formally. She is always focused on her studies, and people have called her features “expressionless.” Naturally, she is also the class leader/representative as well.

English is very difficult for Uni, and Haruka-sensei has noticed she has had problems. When he finally approaches her and tells her that he is going to tutor her after classes so she can catch up with her classmates, Uni is conflicted. On one hand, Haruka-sensei is extremely annoying. He is good-looking, and all the other girls at her school drool and hang all over him. And he lets them! He is always flirting with them, and acting overly-friendly. Uni despises his lack of professionalism. But on the other hand, Haruka-sensei IS really good looking. So good-looking that Uni thinks he must surely be the most handsome man in the universe. Secretly, she admires him very much, and the thought of being alone with him every day after school makes her heart pound.

Yes, Uni is a Tsundere type, a girl who is cold or mean/indifferent on the outside, but is really soft and emotional on the inside. Uni really likes Haruka-sensei, but she could never let it show. In fact, she is always very rude to him, and strictly enforces school rules around him (Haruka has a habit of breaking rules…). As their tutoring sessions go on, Uni falls for him even more. He is patient with her, and devoted to helping her improve.

For his part, Haruka-sensei is a relaxed, friendly kind of guy, and he can immediately recognize Uni’s Tsundere personality. Actually, it looks like that is one of the things he really likes about her. He finds it really cute, the way that she always acts so serious and strict, but blushes when she doesn’t think anyone is looking. But Haruka-sensei has had his eye on Uni, and he is attracted to her. The tutoring sessions bring them closer, and even though Uni protests (too much) Haruka-sensei can tell she probably likes him. He likes her, but how serious is this playboy teacher?

The relationship between Uni and Haruka is cute. They are not complete idiots, and realize that they can’t really have a relationship while they are teacher and student. Fortunately, Haruka-sensei is just a substitute teacher, and will be leaving the school soon. Then they will be free to be together, or will they?

As with most teacher-student shoujo manga, the couple faces the same usual obstacles to their forbidden love. They can’t act like a couple at school, can a teacher even be serious about a student in this way? There is always the danger of discovery, and the doubting of true feelings on both their parts. Love rivals appear, and the strain of the relationship may be too much to handle.

Heh, as I said, I am easily entertained. No matter how many times this sort of plot gets recycled, I still end up enjoying it ^_^;;; There are a lot of funny moments here, as Uni’s inner personality (which is very dramatic and emotional) fights with her exterior ice princess personality. I am also amused by Haruka’s appreciation of the tsundere-ness. There are a couple of moments of 70’s shoujo manga parody, too. Oh, I should also mention that this book is not the smutty type. All in all, this is not a ground-breaking series in any way, but for some fast, silly fun, this is worth a look!