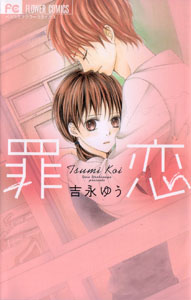 I picked this book up even though the heroine on the cover doesn’t look very happy. She looks all tragic, and he looks vaguely comforting. Hmm. I generally prefer cheerful series, and I was really worried about this one, considering the title, but it turned out to be not depressing at all. I actually like how the heroine in the first story is not your usual straightforward happy-go-lucky girl 🙂 This is a one-shot volume that contains 5 separate stories, and then a final chapter that follows up on the couple in the first story. The artwork is nice. Clean and simple, not awful. The cover does suffer from that darn translucent color haze that Shogakukan likes to airbrush on so many of their covers lately. One of these days I am going to make a gallery of covers that all share this characteristic so y’all can see how often this has been going on recently. I kind of wonder if the covers are all designed by the same editor or something.

The first story is our title story, and it is about a secret, forbidden love. It all starts when our heroine, KANZAKI Sae, sees a classmate of hers, Maki-kun, out at night with a girl on his arm. What makes this so interesting is that the girl was NOT Maki-kun’s girlfriend. What is going on? Why is he cheating? How awful! But what Sae does next does not make the situation any better. Even though they are classmates, Sae and Maki are not particularly close. Thus it is kind of uncomfortable and strange when Sae outright confronts Maki about his cheating. (Sae surprises herself, even!) Maki is not exactly unrepentant, however his attitude changes when Sae proceeds to blackmail him! She threatens to tell people about his cheating unless he goes out with her instead! Is this any sane way to get a boyfriend? Maki is surprisingly cheerful and impressed by Sae’s daring. So every day they meet in an empty classroom and just sort of hang out. They talk about stuff, and Sae finds herself enjoying Maki’s kisses. Maki has not broken up with his girlfriend. He is just cheating with Sae instead. But can Sae really continue to be “the other girl?”

Story 2 involves twin sisters! Tae is the older twin, while Rie is the younger. One day, Rie begs Tae to switch places with her. There is a test in Rie’s class, and Rie also has a crush on a boy in Tae’s class, so she really wants Tae to switch! Tae is reluctant (won’t people be able to tell?!) but she agrees. Once in Rie’s class, she is surprised to discover that everyone assumes she is Rie, and no one says a thing. She is also surprised to discover that Rie sits next to a very cute guy, the one on the soccer team that she saw after school one day. Tae is flustered and nervous, but she has a good time sitting with the boy. He is funny and nice. When he invites Tae to watch him play soccer, Tae wants to agree, but how can she, she is supposed to be Rie!

Story 3 has some Teacher-student fun.. sort of 🙂 Fuzuki has been having some strange dreams recently. In them, she is at school, and she is talking to a cute young teacher. Fuzuki is in love with this teacher, and he knows it. They always hand out on the roof of the school, where he smokes a cigarette. Every night she has dreams about him, and they hold very real conversations. These dreams are so real! The thing is, Fuzuki doesn’t know who this guy is! When she asked a teacher at her school if there were any young ~20 year old teachers there, she discovered that there aren’t! Why is Fuzuki dreaming about this guy? Does he dream about her? Will they ever be able to meet in person?

Story 4 begins with a kiss! It is a summer festival, and a cute young girl in a yukata is being kissed by a cute boy while fireworks explode all around them. It’s very sweet. However, things quickly turn bad when the young couple is confronted at school the next day by classmates who say that someone saw them kissing at the festival. These are elementary school kids, so their accusations are rude and obnoxious. Kissing is gross! The girl, Iyo-chan, is horribly embarrassed at the teasing and vehemently denies it before the boy can say anything. Ever since that day, she and the boy, Tsujiai-kun, haven’t spoken. Now they are once again placed in the same class after 5 years. Iyo feels awful and awkward. She did a pretty mean thing back then. She should be nicer to Tsujiai, after all, he was her first kiss! But it’s obvious he still hates her…

Finally, we have an adorable story that starts with a haircut. One day, Momoka and a friend are (ahem) standing at their classroom window, checking out some cute sempai boys. The friends disagree on their preference in looks, however. While her friend likes guys with longer hair, Momoka prefers boys with shorter hair. This prompts the question from her friend that Shibahara would be out of the question, then? Shibahara is a boy in their class, and he has long hair that obscures his face. Momoka has to say yes. His hair is too long for her tastes. Now, while this conversation did happen in the middle of class, it wasn’t exactly loud. Therefore, Momoka is shocked when, the next day at school, Shibahara arrives to class with a new, short, haircut! And wow, he is actually very cute! Momoka can’t believe this. Could he had overheard her conversation yesterday? Or is this a coincidence? Could he really have cut his hair for Momoka? Momoka suddenly finds herself very aware of Shibahara. Is she falling for him?

The last story brings us back to our first couple. One day, Maki’s friends are trying to get him to go with them, but he tells them he is staying behind to meet his girlfriend. His friends can’t believe they have been dating for 2 months, and they all wonder what he sees in her, after all, Maki isn’t the type to keep a steady girlfriend. But Maki proceeds to tell them why he is with his girlfriend still. It is so sweet 🙂 Meanwhile, Sae arrives to meet Maki and overhears this whole conversation…

This is a sweet book (even though the first couple is a bit sneaky ^_^) My only qualm with it is that the stories sometimes feel a little bit too short. Like, right when things get good, it ends ^^ I want more! Ah well…