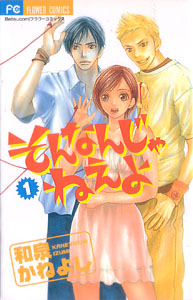 Enough of the one-shot volumes or short series. Here is one that is a bit longer for those of you who like series that span many volumes. I actually don’t own all of this series yet (I’m working on it…) but I like what I have read so far well enough, so here I am recommending it to y’all. This series is a good 9 volumes long. Here we have a love triangle, with a double dose of forbidden/taboo love going on. The plot is very unrealistic, and relies on a lot of the usual manga cliches, but what can I say, I like my cliches ^_^; This series is very “shoujo-ish”, meaning, it is very relationship-focused, yet at the same time, it doesn’t develop those relationships as well as it could have right away. Strange. I like this series, but it has its flaws. The heroine is not too bright (when it comes to common sense), and even lacks the ‘well she is pure/good/noble/tries hard’ spirit that a lot of the clumsy heroines have. The guys are a bit better, but still, I did wonder what they saw in her, ^_^; Even so, It’s an amusing read.

Our heroine is 16 year-old Shizuka. She is an average-looking high school girl. Normally, this wouldn’t be much of an issue, but when you have two older brothers who are so very gorgeous, it does tend to give you an inferiority complex. Shizuka’s older brothers are fraternal twins named Retsu and Tetsu. They, along with their mom, are extremely good looking and popular. So much so that Shizuka often wonders if she might be adopted. All the girls at Shizuka’s school drool over the twins and many of them try to make friends with Shizuka just so they can meet her brothers. Shizuka is tired of this, and wishes she could get her own boyfriend and not have to deal with all these burdens.

Truth be told, her brothers wouldn’t really mind if Shizuka was adopted. Then they could be even closer to her! You see, Retsu and Tetsu are extremely overprotective and care a lot about Shizuka. In fact, their affection for her may not exactly be all that brotherly! (uh oh!) They have also suspected that Shizuka is adopted, and even though they have both fooled around sleeping with other girls, Shizuka is the one they long for. They make their affection for her known, and most of their school knows about the doubt regarding Shizuka’s blood relationship, and they all think it’s creepy how close the siblings are. But that doesn’t stop Retsu and Tetsu from keeping other guys away from her, and generally sticking to her like bishounen glue. They want Shizuka to pick one of them to be her boyfriend, but, freaked out at the thought of incest, even if they aren’t related, she pushes them away.

Then things get even more complicated when they realize that it may not be Shizuka who is adopted, but one of the twins! That means one of them could really become Shizuka’s boyfriend, though technically it would still be incest though not by blood. Shizuka struggles with all of this, but gets no help from her shockingly liberal-minded mother.

You’d think their mom would put an end to all of this speculation, but she is horribly quiet about the adoption issue. She also has no problem with her sons fooling around with girls (just use protection!) and doesn’t even seem to mind the way the twins dote on Shizuka in a more than brotherly way. Woah, freaky mom! Only in shoujo manga, seriously.

This series follows Shizuka as she struggles to deal with her brothers, her feelings for them, their feelings for her, the mysteries of their blood-relationship, and her insecurities about being surrounded by such a beautiful family. While there is a reason given for why the brothers like Shizuka so much, it still seems a bit weak to me, but I won’t complain too much, because they are pretty cool when they do protect her ^^;

So yeah, this series is an incest-o-rama good time. Who will Shizuka end up with? Will she ever get a real boyfriend? Will she always see Retsu and Tetsu just as her handsome brothers? Will they ever find out who is adopted?