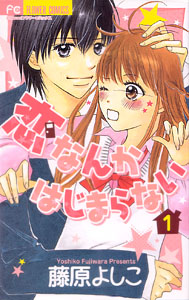 I owned the first 2 volumes of this series for a while, and a later volume, but I was missing volumes 3 and 5. This drove me crazy, because I just couldn’t bring myself to skip from the end of volume 2 over to volume 4. I had to read them in order! So this series sat in limbo for a while until I finally managed to get my hands on the volumes I was missing. Yay! This is a reasonably cute series, though the setup is remarkably like the shoujo classic Itazura na Kiss. It does sport a number of cliches, such as living together, cool guy and dumb girl, etc. but I still think it’s cute enough. I get annoyed at both the hero and heroine sometimes, but I guess I forgive them a bit because they do improve slightly as the series progresses. You just have to be patient, lol. The artwork is very cute. The style reminds me a lot of SUMOTO Amu (of the S+M manga) style. The art leans towards being kind of scratchy, but for some reason I don’t mind that here. There are also some classic 70’s shoujo manga influences in some of the heroine’s reactions to things, with that line that is drawn across her face (as you can see that on the cover), and the shoujo stars in her eyes.

Just like in Itazura na Kiss, our hero, Kanna, is in the A class at his school, the top class. During the school opening ceremony, he gives his speech to the student body, and a girl falls in love with him. When she finally gathers up the courage to confess her love to Kanna, he responds with “I don’t like stupid girls.” See! Exactly like Itazura na Kiss! However, the girl who fell in love with him and confessed is not our heroine, Makoto. Instead, it’s Makoto’s best friend, Tama-chan. When Makoto hears that Tama was rejected so cruelly by this snobby smart guy, she rushes to confront him and tell him off. Unfortunately, Makoto is plagued with chronic clumsiness (seriously, she trips or stumbles constantly) that she ends up knocking Kanna over. That doesn’t stop her from yelling at him though, defending her friend, while he sits there staring at her, especially when he hears her name. She has certainly made an impression on him!

Naturally, this isn’t the end of things. And, just as in Itazura na Kiss, our heroine ends up having to go live with a friend of her father after her parents move abroad. Naturally, that friend of her father happens to be Kanna’s father! Oh no, she has to live with this horrible boy! Makoto is very similar to Kotoko from Itazura na Kiss in that she isn’t exactly very bright and is not good at schoolwork. But she is amazingly honest about her feelings most of the time, and gives people straight answers. Right now, Makoto really really wants a boyfriend. All of her friends have boyfriends, and she feels like she is left out. It’s fun doing stuff alone, but would be even more fun with someone to share it with. She does not hide her ambitions from Kanna, who is kind of amused and amazed by her.

Kanna is an odd guy. He is very smart, but he loves to tease Makoto. He is the type of guy who, in elementary school, would be more likely to pick on and tease the girl he likes instead of be nice to her. Makoto always wears her long hair with a little pigtail sticking out the top of off to one side. Kanna LOVES tugging on this bit of hair, and uses it almost like a handle to drag Makoto around with. Kanna can get quite mean, always calling Makoto an idiot and making her cry. He can be an immature ass in this regard. Makoto is always protesting Kanna’s mean treatment. He is so awful! She hates him! How can she live with him! Yet she becomes strangely used to his teasing, and when he stops pulling her hair, she actually finds herself missing it! Talk about dysfunctional relationships!

While living together, the two become close. It is obvious that Kanna feels something for Makoto, but with his constant teasing, is he really serious? She he can act possessive, but it seems to be like Makoto is a pet, or an object to own, rather than a girlfriend. Even Makoto, silly as she is, knows better than to get into that sort of relationship. Kanna is not serious about her at all! The ambiguity of their relationship really bothers Makoto for a while, but soon there are plenty of distractions. The usual rivals to love appear — a guy who likes Makoto, the obligatory ex-girlfriend of Kanna, and more. When their relationship is already so fragile, can the two of them really have a happily ever after?

Kanna and Makoto go through all sorts of shoujo manga ups and downs. Kanna finally starts to realize his behavior has been awful, and he needs to treat her better. While I am still a little weary of the relationship dynamic where the girl seems so helpless that the guy feels protective of her, they still manage to be a cute couple. Now if Makoto could just stop tripping all the time…