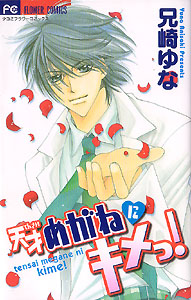 I really like Yuna Anisaki’s series, and I have a bunch of them. I just realized that I haven’t added any of them to this page! So here is one I purchased recently. I didn’t just get this because it was Yuna Anisaki. That cutie on the cover had something to do with it too, of course 😀 I bought this without knowing what it was about, so all I could tell by the cover was that maybe the hero was a scientist, or a teacher or something. And is cute in glasses 😀 Well, that sounded like a good enough reason to me to get this, hehehe! This book does have a kind of generic smutty shoujo-manga plot, but I like it a lot anyway. The art is cute, and I really like the hero…

This book basically follows the ups and downs of the relationship between Aya, an average, somewhat silly 2nd year high school student, and her new boyfriend, a first year student named Kei. Kei is a super genius student and is really popular with all the girls. Beauty and brains in one guy! At the beginning of the book they have been dating for about 2 weeks, and Aya is so happy to have him as her boyfriend. As for Kei, all he can see is Aya. He is remarkably patient with her and cares for her very much. Yeah, there isn’t much of an actual plot to this book. It really just follows their relationship, as they have some misunderstandings, arguments, and make up. But Kei is such a cool boyfriend to have~! And he has a rather… inventive way of showing the entire school how much he like Aya… There is a separate story at the end of the book that shows how Kei and Aya met and first started dating. I don’t know why this was placed at the end of the book instead of right at the beginning, but it’s a cute little story.