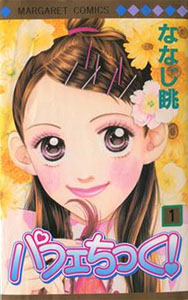 Heh, I jump from one very long series (Tokimeki Tonight) to another, Parfait Tic!. However, this one is a bit more modern. This one is already a rather popular series, so I never really thought to talk about it here, but then I realized that they are making a live-action TV drama version of it in Taiwan, and I suddenly felt the need to go re-read all my volumes. This led me to feel a fluffy shoujo-angsty Parfait Tic high, and I couldn’t resist making an entry now, lol. This series is a classic love triangle manga, the type that spawns those never-ending debates of ‘who do you like better?’ when talking about the guys in the series. Even though this series is 22 volumes long, it is a fast read. I seriously couldn’t put my books down, and went from one to the next in a crazed shoujo-induced haze. The artwork is cute (in particular the color covers) and, while the shoujo love triangle isn’t exactly a new concept, it is still fun to watch how the relationships grow and change. All of the characters are likable, and I honestly wasn’t sure who I wanted to end up together!

Fuuko is a cheerful and energetic girl on the verge of starting high school. She lives in an apartment complex where she spends a lot of her time playing with and taking care of the smaller children. Everyone loves her, and she is a genuinely happy and carefree girl. Naturally, this is going to change! Fuuko’s pleasant days are interrupted by the arrival of a moving van carrying the newest residents of her apartment complex, a pair of boys the same age as Fuuko! Their names are Ichi and Daiya, and they are cousins. Starting that day, they will be living in the apartment directly above Fuuko, and will be attending the same high school! Fuuko is shocked and excited by their arrival — they are both so cute! But their personalities are so odd! Daiya, the boy with dark spiky hair, is outgoing and childish, and kind of an idiot. He doesn’t take anything seriously! Meanwhile, Ichi, the boy with straight hair, is too serious! He doesn’t speak much, and he acts so cold! What is with these weird boys! Fuuko doesn’t really want to go to school with them, but her mom leaves her little choice. Even worse, she ends up in the same class as Ichi.

Fuuko does her best to enjoy her high school days, but these pesky boys make things difficult. They are both so rude (in different ways) and it’s annoying how all the other girls drool over them. But it is Daiya’s outgoing personality that ends up drawing Fuuko first, and she begins to fall for him. But he is a total player, flirting and kissing all the girls without showing any deep emotional connection to anyone. Can Fuuko really find happiness with a guy like this? She can already tell that confessing to him would be pointless. There is no way he would ever return her feelings, especially when there is a beautiful and talented sempai on their tennis team who is also in love with him!

Meanwhile, Ichi has easily guessed where Fuuko’s feelings lay, and he manages to both feel pity for her (even he can see it’s a lost cause) and anger at Daiya for being so clueless when it comes to love. While he doesn’t exactly support Fuuko in her quest to win Daiya’s love, he can sympathize with her plight and see how hard it is for her to like Daiya, who is such a fickle and clueless guy. But Ichi isn’t free from being a clueless idiot, either. When he starts to develop strong feelings for someone, he manages to ruin his own happiness by being distracted by an old flame. He can’t see the gift right in front of him. Will he miss his chance at a good thing? There is some adorable romance involving a couple of the supporting characters, too. They seem much more well-adjusted than our poor heroine!

Parfait Tic is one massive love triangle with Fuuko as the main source of contention. This manga does get a bit frustrating, with everyone falling for each other at really inconvenient times. Everyone goes in circles around each other and it takes forever for feelings to become aligned properly. There isn’t really much of a plot other than all the romantic angst. It follows Fuuko, Ichi, and Daiya through their freshman school year as they face all the usual school events that make up school-life drama (sports day, summer vacation, school festival, birthdays, Christmas, New Years, Valentine’s day). Who will Fuuko finally end up with? How can all these tangled feelings ever possibly work out? Personally, I think it should end in a happy threesome, but it is not likely for that to happen 🙂 Will Fuuko ever find happiness?