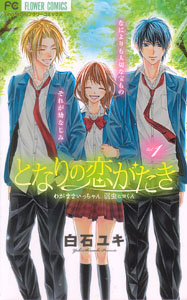 Mmm, love triangle! That is what this cover has written all over it! It is so obvious! And, as I am a fan of love triangle series (which unfortunately rarely seem to end in the happy threesome I always hope for, ahem) getting this one was an obvious choice. However, after reading so may love triangle series, I think I can already tell who she will pick simply because these girls never pick the one I like the most 🙂 I really liked one of these guys just from looking at him on the cover, so I know he is going to lose! This is volume 1 of a continuing series, though, so I may be wrong. It would be amazing if she picked the guy I prefer! This series is non-smutty so far, which is surprising, considering it ran in Sho-Comi magazine. The art style is really nice, with simple clean lines and very cute character designs. I have summarized a one-shot volume by this author, Koibito de Akuma, and I think the art has improved a little since that volume. This story is a bit more angsty as well.

So, on with the story. The girl on the cover is named Akane, and she is about to start her first year of high school. She is very excited about this because she has been accepted into the same school that her two dearest childhood friends go to. Those childhood friends are the guys on the cover. The one with the light hair is MATSUDA Hiro, and the one with the dark hair is KADOKURA Ichiya. Naturally, this being a shoujo manga, both guys are super hot and popular at their school. Hiro is known for his relaxed, laid-back attitude. He will go out with anyone, and is a happy-go-lucky type of guy. Ichiya is the opposite. His image is more cool and unapproachable. When girls do ask him out, he is more likely to say he is not interested in any girls right now. At Akane’s new school, her best friends make Akane the target of much envy.

Because she has always had these two handsome, overprotective best friends around her, Akane has never had a female best friend. She is wistful when she imagines having girlfriends to hang out with. But Ichiya and Hiro make things difficult. When girls do attach themselves to Akane, it is difficult to trust them. Do they really want to be friends, or do they just want easy access to Hiro and Ichiya? People at school speculate about whether Akane is dating either guy, but as this story begins, she is just dear close friends with them. They have played together since they were children and know everything about each other. It helps that they all live in the same apartment building in apartments right next door to each other.

But right off the bat, Ichiya makes Akane’s life more complicated when he confesses to her that he wants to be more than friends. He loves her, and wants her to go out with him. This news shocks Akane, and she has a hard time figuring out how to reply. How does she feel about Ichiya? And what about Hiro? Ichiya’s confession does not please Hiro. There is a sense that perhaps Ichiya violated an agreement between the boys. Akane has a hard time answering Ichiya right away, so for a while, relations are tense between the trio. Hiro is not thrilled about this situation because he, as you can guess, also likes Akane! Will he just let Ichiya have her?

How can Akane possibly choose between her two dearest friends? How will the school react if she suddenly started dating one of them? Things are already uncomfortable with her just being a friend! Akane has to try and sort out her feelings. Who will she choose?

There are scores of predictable elements in this series, and lots of OOH DRAMATIC moments. There isn’t much of a plot aside from the how the dynamics of a friendship changes after there is a love confession. She makes a decision one way, but then there is serious temptation the other way. With both guys insisting they like her, poor Akane is being pulled in 2 directions. That’s a lot of pressure! Both guys have positive and negative aspects to their characters. Neither is perfect. After reading so much Parfait Tic I am not sure if I can handle this if the relationships go around in circles for too long, but so far, this series holds my interest and I look forward to seeing how it develops in future volumes.