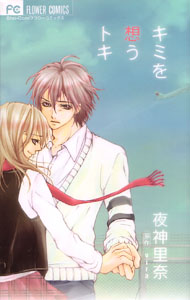 There were a lot of little things about the cover of this book that caught my attention and drew me to buy it. First, it was nice to see the lack of the translucent color haze that currently plagues Flower Comics covers. Second, I liked that the couple is off-center like that, and the way her red scarf draws my eye towards her. One distracting thing about the cover is the size of her hand. Seriously, her hand is bigger than his! It’s weird and out of proportion. However, I didn’t let that little detail get to me 🙂 The guy is cute, and his expression made me wonder if this would be a sad series. This book is filled with three one-shot short stories. All of them are cute, and not depressing, thank goodness. I think the art inside the book is a little bit better than the cover. These are non-smutty high school romance stories. I believe they were originally mobile phone stories (by Vira) that were adapted to manga by YAGAMI Rina. I love how you can publish mobile phone stories in Japan. Is that done elsewhere?

The first story is about the couple pictured on the cover. The girl, Momo, has bad luck with romance. It’s not that she can’t get a boyfriend, it’s just that she has never really been in love with anyone. She keeps going out with guys she doesn’t really like, so her relationships don’t last long. It seems like she is always breaking up with someone. “What is love?” Momo asks herself. She doesn’t know. One day (after yet another breakup) she is riding the bus home from school and pondering her love life, when the person sitting next to her on the bus drops something. Momo looks down and sees a strawberry candy rolling away. She turns to the person next to her, and sees it’s a boy around her age. That was his candy (and apparently his last strawberry one) and he looks extremely sad that he dropped it. Momo can’t understand why he would be so upset over a candy — she can almost see the sad puppy-dog ears on his head — so, to cheer him up, she gives him a candy she had in her pocket. It’s also strawberry-flavored. The boy is so thankful to receive the candy, that he watches with stars in his eyes as Momo exit the bus.

Momo never thought she would see the boy again, but, sure enough, he is a student in her school, and is in the class next to hers! She finds this out when he almost ambushes her in the hallway the next day. He creates quite a scene in front of everyone, calling her “His Angel.” Momo is embarrassed (soon other people are calling her Angel too!) and rudely calls him “Candy Boy” instead of by his name, ICHIGAYA Shuuya. From that day on, Shuuya will not leave Momo alone. He sticks to her like glue! It is like he is a one-man Momo Fan Club. He wants Momo to go out with him, but she refuses. Yet she tolerates his presence and Shuuya does not give up. Will Shuuya’s persistence wear Momo down? She has never loved anyone, Could he be the one? Or will Momo’s stubbornness push him away? Momo’s dating past comes back to haunt her, unexpected family problems arise, and rivals appear to threaten their future happiness! This story takes up more than half the book.

The second story, called “Ryakudatsu Egoist,” begins with that time-honored shoujo manga situation of getting groped on a train. Our heroine, Arisa, is just realizing that a pervert is standing behind her and wondering what she should do, when she is rescued by a very handsome guy named RENJOU Dan. It was love at first sight for Arisa. Unfortunately, her budding love takes a strange turn when she manages to make her love confession to the wrong boy! You can’t blame her though, he looks exactly like Arisa’s “Dan-sama!” Turns out that Dan has an younger twin brother, RENJOU Gen. Arisa meant to confess to Dan, but confessed to Gen instead. Gen took the confession situation rather well, but seems to think that Arisa’s chances of getting her brother are slim. This prompts Arisa to beg Gen for help in winning Dan. Gen agrees grudgingly to help her. While at first, Arisa thought that Gen was the exact opposite of the kind and heroic “Dan-sama,” she slowly comes to realize that beneath his cheeky, somewhat argumentative exterior, Gen can be very kind, too. In fact, Arisa discovers that Gen has a lot of good qualities. But what about Dan?

Story 3 isn’t exactly smutty, but it does begin with an unexpected bedroom scene. It is morning, and Aki, while half-asleep, mutters that she is cold. The person in the bed with her offers to warm her up. This causes Aki to pause. Who is in bed with her?! She wakes up in shock to find herself naked and in bed with one of her underclassmen. He seems fairly calm about the situation, but Aki freaks out. How did she get there? How much did she drink at the class party? Did they really do anything? The guy points out helpfully that his chest is covered with kissmarks. How did those get there? HE asks her if she sees anyone else in the room with them? Uh oh… this can’t be good. The guy in question is SAKAMAKI Chisato, the smart, handsome, rich… perfect guy at her school. This is ridiculous! Aki tries to remember what happened, but it’s all fuzzy. This all seems surreal to Aki, but it gets better. Chisato wants her to take responsibility for her actions, and demands that Aki must become his girlfriend until all the kissmarks have faded! Thus begins a strange relationship. Chisato can’t be serious about her. He is popular with girls (even his teacher!) and is always joking around. Aki has little confidence, and things that happen soon after don’t do anything to help. Is there any future in a romance that begins in such a way, with such a person?