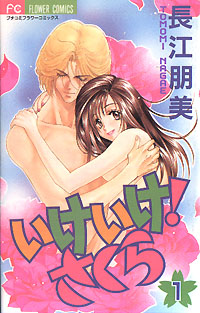 Okay, I admit it. I bought this because they were naked on the cover ^_^;;;; It’s a little embarrassing to admit, but I am a sucker for all those cheezy shouji sex stories that run in Sho-comi and Sho-Comi CHEESE. (I also have a habit of buying anything shoujo that has ECCHI or H on the cover ^_^;;) So yes, this volume is nothing but a funny shoujo sex comedy ^_^ the art is rather nice as well, though the guy in this looks kind of funny sometimes. So don’t go buying this looking for a beautiful romantic story or deep plot. This is fluffy sexy silly fun! Expect to see most of the comedy involve sex ^^;

This funny story begins with a girl named Sakura having fallen asleep on a bench. Unfortunately not only did she fall asleep, but she also slid down so her head was resting in the lap of the other person who was sitting on the bench. He happens to be a really cute guy. Eventually Sakura wakes up, and a few moments later realizes her head is in some guy’s lap, and er… what is that? AAAAK! Okay, so this is not a good first meeting…. Anyway Sakura is a virgin. But she very much does NOT want to be one. She keeps fantasizing about the guy she met on the bench ans actually manages to find out who he is and gets his phone number. Ahh quite an industrious girl ^_^ But before Sakura can do anything, she actually ends up meeting him at a social gathering/dinner with her friends. LUCKY CHANCE! Sakura REALLY likes this guy, and he seems like the ideal one to sleep with ^^;; At the dinner, they both get totally drunk and Sakura ends up in his apartment. Okay, here is what she has been waiting for! (I wish I could figure out what his name is. It’s in kanji with no furigana -_-) But ack! He has passed out on his bed! hmm not exactly what Sakura wanted, but there he is, laying spread-eagle on his back… such a nice opportunity… So she begins to undress him…

Okay, so most of this volume involves Sakura trying to lure this guy into her bed. However it’s difficult when she is clueless as to how to go about it, and he is generally guy-clueless in that he doesn’t seem to notice all her hints ^_^;; And then when things finally do seem to be looking good for Sakura, she manages to embarrass herself every time! How will their relationship work out? This is volume 1, so I am assuming there is more of this. To get an idea of the progression of the story, the chapter titles are: 1. first meeting 2. first date 3. Ecchi! 4. Kimochi ii? Feels good? 5. Jealousy. So the subject matter is kind of silly, but this manga is funny! 🙂