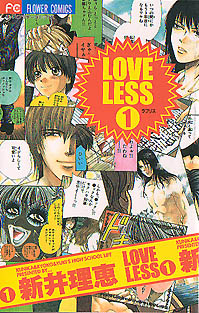 I picked up this manga called “Loveless” mainly because the cover art was done in a style that reminded me on another manga I like, GTO. As you can see, the cover consists of a bunch of scenes from the comic all colored and patched together. The GTO manga does this too, and it is very funny 🙂 This series looked funny too, so I figured ‘what the heck!’ Hooray for impulse buying! This manga ended up having one of the funniest moments in a shoujo manga that I have read in a while. The total fangirl moment that I could SO relate to… I don’t want to spoil it for you though!

No, this is not the “Loveless” by Yun Kouga with all the catboys. This is a completely different series. Just like the cover, the interior of this comic reminds me of a shounen comic for some reason. I can’t really explain it, but the story or style it is illustrated gives me the impression of a shounen manga author trying to do shoujo. Not that this is a bad thing at all, I enjoyed ‘Loveless’ very much! It was just an impression I got. Anyway, this manga is the story of Kunika, a high school girl who is one of three inseperable friends (the other two being shy and cute Yuki, and aloof and tough Ryoko) Kunika is very outgoing around her friends, though she can get overdramatic at times. In the beginning of the series, she is lamenting over the fact that she does not have a boyfriend. She really wants one, and even has a particular guy in mind.

His name is Gouto-kun, a classmate of theirs. He is really cute, and Kunika has a major crush on him. She likes to fantasize about what it would be like if they were together. But how does Gouto-kun feel? Kunika is surprised when he confesses his love, but it doesn’t go how she planned!I would say more, but it would be spoiling things! This series is very funny! Kunika is very dramatic, bordering on ridiculous, but I like her a lot. She has very silly exaggerrated facial expressions sometimes, as does Gouto-kun. Gouto-kun is amusing also, in his persistence. I am hoping for more character development in future volumes with Ryoko. Her personality is tough, but it hides an insecure girl inside. This is volume one, and the series runs in Monthly Betsucomi magazine. I look forward to getting volume 2 on to see what happens next!