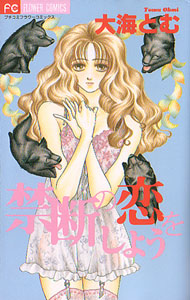 I no longer live near a manga bookstore, so this tankoubon was actually purchased at random online from a Japanese bookstore website 🙂 All I could tell about this series was that it has nice art (I could see a scan of one of the pages inside) and that it might be some sort of werewolf story. At least, I really HOPED it was a werewolf story, otherwise the girl and the dog on the cover would worry me ^_^; Fortunately, I lucked out. This is, indeed, the story of a girl and her pet werewolf. Whew, that’s a relief! This is a really amusing story. I loved the artwork (the guy looks really hot) and the facial expressions can be very silly.

How odd it is that three manga reviews in a row involve stories about girls with pet bishounen ^_^; The other two series (“Kimi wa Petto” and “Watashi no Shounen”) featured boys who put up with the treatment by the girls. In this case, our sexy bishounen actually IS a pet, sort of… he’s a werewolf! One evening, a cute young woman named Hisako is returning home from work when a drunkard starts bothering her and trying to make her go with him. Fortunately, she is rescued by a large black dog (or is it a wolf?) which chases the drunkard away. Hisako notices that the animal has beautiful yellow eyes, and decides to take the creature home with her. At her apartment, she presents the animal with a citrine pendant, a quartz stone that is a golden yellow color that reminds Hisako of the creature’s eyes. Just then, her doorbell rings, and it is one of Hisako’s male admirers, who makes some unwelcome advances towards her. Twice in the same night Hisako is rescued from unwanted attentions, this time by the very sexy man in her apartment, who appears behind her, and is wearing the citrine pendant! His name is Yato, and he is a werewolf! However, he is sort of a reverse-werewolf. By day he is a wolf, by night he is a cute guy 🙂 Yato immediately informs Hisako that he is attracted to her. She is attracted to him as well, but can this sort of relationship possibly work? There are many obstacles on their path to love, how can they overcome them all? This is not a one-shot series. It actually continues in a second series for many volumes.