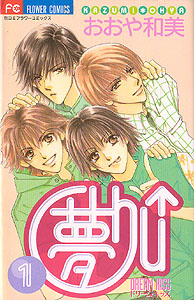 Why have one cute guy in a series when you can have a WHOLE BUNCH of them? I like this thought! OOYA Kazumi draws some of the cutest manga guys I have seen. I am not exactly sure why I like them so much, but I can’t help it. Maybe it’s something about the eyes? I am not sure ^_^ I am amused by how OOYA Kazumi draws such good looking guys, and is not afraid to tease us with the possibility of some yaoi. Anyway, this is a series that lasted for about 3 and a half volumes. The last volume has several unrelated short stories that are also worth reading.

Azuki is not your average 15 year old. Sure, she is a student, and has the usual worries about her studies. But after school she has an unusual life. Usually shoujo manga series are about average girls who end up with hot idol guys. In this case, Azuki is the daughter of the president of a major talent agency, and is surrounded by idols and other famous people all the time. In fact, the hottest idol singing duo, ‘Romeo Romeo’ was discovered by Azuki, and it was because of her that they had their debut. Now her company is planning a new television program called ‘Romeo Gakuen’ (Romeo School) which will star a group of handsome guys as students, and will focus on their life. It is time for the show to be cast, and guys from all over have come to audition for the program. They have to have some acting or singing talent as well as good looks. Azuki’s involvement with the show is somewhat minor until one day, when she is walking home from school, she manages to first step on his foot, then collide with a parked bicycle. She falls to the ground and drops her stuff. A guy helps her up, but he isn’t very polite. He *is* very cute though, However because of his attitude, Azuki marches off and gets a haircut! Her long hair is cut to chin-length.

Much to her surprise (she obviously doesn’t read much shoujo manga, else she would not be that surprised ^_^;), Azuki ends up running into this same guy later in the day at the Romeo Gakuen auditions! But he doesn’t recognize Azuki in her street clothes and short hair, and mistakes her for a guy! Thinking she is there for the audition, he drags her into the waiting room. When Azuki’s father and the talent agency staff realize this, they think it’s a great idea for her to continue her deception, and interact with all the guys auditioning. She can be their spy, and determine which of the guys would be the best for the show! Unfortunately, her secret doesn’t last very long, as one of the guys auditioning finds out and her cover is blown. This story follows Azuki’s adventures as she deals with all the guys who make the final cast of the show. There is the obligatory love triangle and competition between all the guys. Past loves show up and each guy has his own problems and past to deal with.