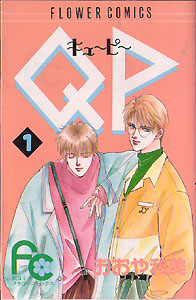 This series is a bit older than the ones I usually review, but it is by an author that I really like, and it is only 2 volumes long, which means it should be fairly easy to collect. The author is OOYA Kazumi, who really has a great way of drawing guys. It is something about their eyes, I think, that makes them so hot ^_^ The eyes sparkle, or something… Anyway, even back in 1990 her art style was nice 🙂 It has changed a little bit since then, but it’s still great. This set of books was actually given to me as a gift, but because of the author, I am sure I probably would have bought it on my own eventually too 😀 This is a high school romance, with just a little bit of the supernatural thrown in it as well!

A lot of this story takes place in a small group of buildings that are set right in the middle between an all-girls high school and an all-boys high school. The buildings are surrounded by chain-link fencing, and teh area is sort of a little sanctuary where the girls and boys from the schools can meet up together. There are two very popular boys who have taken over one of the buildings in this sanctuary area. They are Motoki and Haruka, and all the girls from the girls school worship them. There is always a crowd gathered around the small building they like to hang out at. One day, a rather tomboyish girl named Chihiro is dragged to this sancutary area by her friend Ai-chan, who really wants to look at the two popular guys. She tells Chihiro that they are called the Q.P. which stands for “Quality People”. Chihiro isn’t too impressed by this, and is not all that dazzled by the guys, either. But when she happens to touch hands with Motoki one day, the results are quite… shocking… literally! Chihiro manages to gain entrance into the exclusive company of the QP group, and drags a greatful Ai-chan along with her. Ai-chan also has an interesting ability to show the QP group, it involves making things fall…

This is a silly story, with some romance (the kind that starts as fighting, of course!) and nice artwork. Every page seems to have a whole lot of stuff going on in it. With only two volumes, it’s an easy one to pick up! 😀