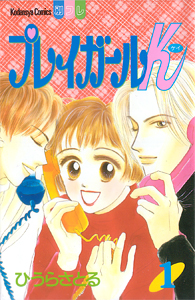 I found this book recently when I unearthed a box full of manga in the garage that I somehow missed when I was unpacking after moving from TX back to CA. After dealing with the problem of figuring out where to put all of the newly-rediscovered manga, I found a lot of fun series I had forgotten I owned. Hey, here is some new stuff to talk about, yay! I picked this one first because it is a nice mid-90’s series. I haven’t paid all that much attention to series from the early-mid 90’s, so I figured it would be fun to fix that. The art style in this book screams “90’s,” with the hair styles and baggy clothes. The eyes are kind of funny too, but I still really enjoyed this book. The style reminds me a little of Miracle Girls. It’s very messy and scratchy, and sometimes it is difficult to figure out what is going on. I know, this is the opposite of my general preference when it domes to manga style, but hey, it’s a nice to have a change of pace every once in a while.

15 year-old KUSUNOKI Keiko has been best friends with TAKAGUCHI Yumi since they were very little. They live next-door to each other, and have gone to the same schools forever. They are very close, but there is just one problem — Yumi is gorgeous. Tall, elegant, with long hair and a gentle look, all the guys fall for her. Every time Keiko has liked a boy, the boy has fallen for Yumi instead! Keiko is falling behind Yumi, and it drives her crazy sometimes!

At school, Keiko is the class representative. She has a very nerdy style, with her hair scraped back in tight braids. She may seem to take things seriously, but deep inside she is a romantic. Now she has a crush on a boy at her school. His name is Minami, and he is a filmmaker and musician. He is so fun, and Keiko admires him and his enthusiasm for his big music and film projects. Minami seems to like Keiko too, he teases her a lot and is flirty and friendly. But how does he really feel about Keiko?

Well, it turns out that it doesn’t matter, because soon Keiko sees him holding Yumi in his arms and kissing her! No! Not again! Why do all the guys she likes fall for Yumi? What Keiko doesn’t realize is that this may be a deliberate act on Yumi’s part, stealing everyone Keiko is interested in. How awful! She is like Sae from Peach Girl! Before she can blink, Minami and Yumi are a couple! Keiko has to put up with seeing them together, what a pain!

One night, Keiko is at a music/dance club with the happy couple, suffering just seeing the happy couple together. She couldn’t be more depressed, but soon she is distracted by a buzz of interest that spreads across the club. The DJ playing the music has captured the attention of all the girls. HE is very cool, with long-ish hair, head phones, and great style. Everyone says that the amazing song he’s playing is his own creation. How talented! Keiko thinks he’s interesting too, and gets a huge surprise when the DJ takes notice of her, too! In fact, he leaves the DJ booth and walks right up to her! Who is he and how does he know Keiko? It takes moments, but the guy sweeps Keiko away and gives her a quick make-over, changing her hair and make-up, changing her into a very cute girl. What is going on here!?

Wait a minute, this guy looks familiar…. is that…. no way, it couldn’t be…..is this guy Hirama-sensei? The totally geeky and un-stylish science teacher at her school?! What is he doing here dressed like this? It turns out his trip to the club was all a part of an experiment. He then asks Keiko if she would be willing to be his guinea pig! He wants to start a new experiment where he transforms Keiko into a playgirl! “I wonder if you can steal Minami way from Yumi…. hmm..”

Is he crazy?! Should Keiko go along with this? What if the experiment works? Will Minami really like her? How will Yumi react? Is Minami worth getting? And what about Hirama-sensei? He’s rather good-looking when he isn’t wearing his dorky glasses and lab coat… The relationships get complicated as a sort of love square forms. Who will end up with who? Actually, I am not sure myself ^_^; This series is 7 volumes, and I only have the first one so far. However, I just realized that the series was reprinted in 2007 with nice, updated cover art, so I will try to get those so I can find out too! My interest is now re-kindled in this series, heheh 😀