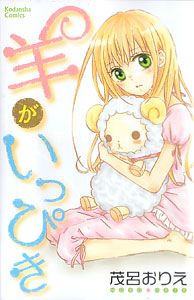 Isn’t this cover the cutest? I bought it for the adorable sheepy plush thing that she is holding. I would love to have one of those! It looks soft and fluffy. This is a fun book that is, as far as I can tell, this author’s debut collected volume. I think she had a couple of one-shot stories previously, but this is the first tankoubon she has had published. The art is clean and cute. There is something unique about how it looks, I think I would recognize it again if I saw it. I like how she draws smiles. She draws eyes big, but not overwhelmingly so. The only quibble I have with the art is that she draws heads a little bit too large for the bodies. It’s not awful, just a little bit distracting. Still, it isn’t enough to keep me from enjoying the book and this cute story. This is a one-shot volume where the main story takes up most of the book. It’s a love story with a supernatural twist. There is an unrelated short story at the end.

Our heroine is a girl named MIHAMA Mei. She is a 2nd year middle-school student who lives with her brother, Saeki, a 2nd year college student. Their parents died a while back, and since then, it has been Saeki and Mei on their own. One morning, Saeki tells Mei that, if she’s ok with it, they will have a 3rd person living with them. One of Saeki’s underclassman friends is all alone and needs a place to stay, so Saeki invited him to stay with them. Mei is startled (a boy living with them?) but quickly agrees, because it’s her brother’s friend. This should be fun!

Unfortunately, Mei’s good feeling is dashed when, later that day, she gets a phone call informing her that her brother has been in an accident. He…. didn’t make it. Now Mei is all alone in the world, no mother, father, or brother to take care of her. Obviously, she is devastated. Her brother was her everything! At the funeral, she is forced to put up with overhearing some of her family ‘friends’ and neighbors whisper some horrible things, wondering who will get stuck taking her in. None of them want to do it. (Seriously, what is up with this? In so many manga and drama series, the family members say such awful things at funerals, I can’t believe these people!)

Mei doesn’t exactly want to go stay with any of these hags either. She is not going to leave the house she lived in with her brother! The decision is taken out of her hands with the sudden arrival of a strange boy in a suit. He grabs Mei and announces that he will be living with her in her house! He grabs Mei and they flee the funeral, leaving everyone staring after them in shock. Mei is shocked too, she doesn’t know who this guy is! But it’s soon made clear that he is the friend her brother had spoken about previously. He still wants to live with her, as her brother planned, but Mei is uncomfortable with this…. her brother isn’t here anymore, she can’t live with a strange boy!

But he stubbornly refuses to leave, and ends up comforting Mei in her grief. He turns out to be very easy to talk to, and she is soon confessing how much she loved her brother (possibly more than can be considered ‘sisterly’…). The boy comforts Mei some more, and she begins to feel better. Turns out the boy is named Leon. He is older than Mei, but younger than her brother was. He is gentle and handsome, and it doesn’t take Mei long to warm up to the idea of living with him. Plus, all her friends at school are dazzled by how cute the guy (Leon) waiting for her at the school gate on his motorcycle is.

Mei tries to act normally, but she still suffers stress, pain, and sadness from losing her brother. She seems to start having some panic and anxiety attacks, thinking she is all alone. Leon helps her get through this, and they start to form a close bond. But just as the pair starts to get close, an unexpected arrival appears to complicate things…. Saeki!

Yes, he’s still dead. But he is not gone after all. Saeki’s ghost has decided to stick around Mei, and both Mei and Leon can see him! Saeki acts as cheerful and fun as he was while alive. Mei is extremely thrilled to have her brother back, even though she can’t hug his ghostly form. Leon is shocked and happy too, though somewhat troubled because he had found a journal of Saeki’s that seemed to indicate that Saeki felt a bit more than ‘brotherly’ towards Mei, and that he was not, in fact, related to Mei by blood after all! Talk about an unusual love triangle! Will Mei and Leon be able to have any sort of relationship with the ghost of Saeki lingering? Will Saeki be able to express to Mei how he feels? What will happen if Mei finds out the truth?