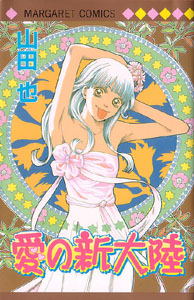 I actually had a vague idea of what this book was about before I bought it. Amazing, I know! So no, I didn’t just buy it because of the cover this time! I saw a preview of a couple of pages and read a really badly mangled bablefish translation of a plot synopsis. Amazing that I managed to be interested enough in this after reading such a mangled summary! The art is very cute for a Margaret Comics series. Anyway, I really liked this story because it seemed very different from a typical shoujo manga.

The ‘heroine’ of this story is actually a trans girl named Souhei. Previously, she was very cute boy, but she has never really felt like a ‘boy’. So when she has the chance to transfer into a new high school, she decides to do it as ‘Sara’ a girl (much to the chagrin of her mother). She wears a girl’s school uniform and wears her long hair in a very cute fashion. She is finally going to be the real person she feels like inside. Things start off great for Sara. On the very first day of school she meets a really cute guy on the train. His name is Naruse-kun, and thanks to the close-quarters on the crowded train, he quickly realizes that the girl pressed against him is not exactly what she appears to be. Fortunately for Sara, she is placed in Naruse’s class at school. Lucky! The class is rather shocked when their new supposedly male transfer student, ‘Souhei-kun’ is actually such a cute girl. But their teacher outs Sara as the former Souhei. The guys are crushed. However Naruse finds himself attracted to Sara regardless of her gender. Sara totally falls for Naruse too. Can they really become a couple? Sara must face a lot of pressure from her mother to conform to acting/dressing like a ‘normal’ guy. And Naruse has to come to terms with the fact that he is attracted to a trans girl. A very unusual love story for Margaret Comics! 😀