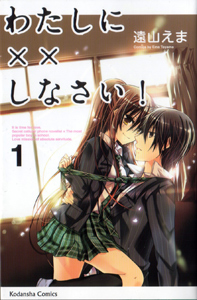 I picked up this series because it is by TOYAMA Ema, the author of another series I enjoyed, Koko ni Iru yo!. I like this author’s art style. It feels very shounen and ‘moe’ to me, like something you would see on doujinshi fan art or shounen ero games or something. It’s interesting to see that art style applied to a shoujo story. I wonder if TOYAMA Ema is a male or female. At any rate, Koko ni Iru yo! was cute, and this series is a lot of fun as well. The art is once again very attractive, and the characters are quite unique for a shoujo story. I especially appreciate how the heroine does everything in the exact opposite way to what a typical shoujo heroine would do. She is quite unpredictable! In spite of the xx in the title, this is not exactly a smutty book. Like the CLAMP series xxxHolic, the xx here is simply used as a placeholder for the various things the lead girl orders the guy to do.

The main character of this story is a girl named HIMURO Yukina. Like the ‘yuki’ (snow) part of her name, Yukina is called the ‘snow woman’ at her school because her personality is very quiet, and she stares around her with ice cold eyes. Everyone is sort of afraid of her, and she is very unapproachable. Her steady gaze even intimidates her teachers! What everyone doesn’t know, is that behind her frosty look, her mind is greedily observing everything around her and storing that information for future use. Yukina actually spends all her time carefully observing her classmates.

Why does she do this? Well, you see, Yukina has a secret identity! When she is not at school scaring people, she spends her time writing internet novels. In fact, her series are so popular, she is often voted the #1 author on the internet novel site she publishes at. Under the pen name of ‘Yupina,’ Yukina spins fantastic stories of adventure and friendship. She has quite a large following, and enjoys her great popularity, but there is something missing. One vital element that her stories lack, and that her readers are starting to notice – romance. Yupina is a great author, but her weakness is that she has never experienced love or romance, so she has a difficult time including it in her stories. All her heroes and heroines remain good friends. Now Yupina’s readers are starting to get a little impatient, and want stories with more than just adventure and friendship.What will Yukina do?

There is only one solution – Yukina must fall in love and experience romance! How else will Yukina be able to write about it? Of course, there is that nagging problem of her unpopularity at school. It’s hard to fall in love and have romance if there are no guys interested in her. Well, then. She’ll just have to MAKE a guy fall in love with her! This seems like a crazy idea, but leave it to Yukina to calmly face this challenge and solve her problem.

Enter KITAMI Shigure. He is the most popular guy at school (of course!). As is the natural law for shoujo manga, the hero is tall, good looking, and is considered to be a ‘prince.’ All the girls love him, and he gets love confessions constantly. Ahh, but like Yukina, Shigure is not quite what he seems. Yes, he is always polite, smiling, and perfect on the outside. However, on the inside, his personality is stubborn and egotistical. A prince? Hah! He actually plays a game out of making all the girls at school fall in love with him, and he keeps track of his conquests in a little book. When he tries to put the moves on Yukina, the last girl on his list of potential victims, he quickly discovers that she is not one to easily fall for easy charm and a handsome face. It gets even worse for him when she finds his notebook and learns of his twisted personality.

One great thing about Yukina is that she is quick-witted, and will not hesitate to turn things to her advantage. The contents of the notebook give Yukina the perfect ammo to use to bend Shigure to her will and use him in her love experiment! Yes, she blackmails him! In exchange for not spreading the word about his little book of conquests (thus ruining his perfect image and popularity) he must obey all of Yukina’s demands! She wants to learn about romance, and he is going to be the one to teach her!

It is safe to say that Shigure is not thrilled with this arrangement. Being forced to obey the snow woman? No way! But as time goes on, and she gives him one unbelievable love “mission” after another, he begins to appreciate how brutally honest Yukina is. This is something I like about her as well. You take the way a typical heroine in a shoujo manga would react to a given situation and think of the exact opposite — that’s Yukina. She may be quiet in class, but she has no difficulty being extremely straightforward and honest about how she feels to Shigure. This behavior confuses him and attracts him.

Thus begins an unusual love-hate relationship based on blackmail, yet extremely honest at its core. Making things more complicated is Akira, Yukina’s cousin. He is the same age as Yukina, and attends the same school, but is in a different class. His feelings for Yukina may be a bit stronger than is appropriate for a cousin. His reaction to Yukina’s love experiment with Shigure is unexpected. Throw in jealous classmates, and a clingy childhood friend, and you have a unique school life romance!

Will Yukina be able to discover what love is all about? Will she be able to write it into her novels?

Amazingly, this series has been licensed in the US and released in English under the name “Missions of Love”! It can be purchased HERE!