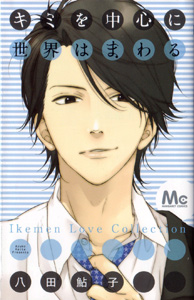 HATTA Ayuko is steadily becoming one of my favorite mangaka. There is something about her clean and attractive art that really, really appeals to me. Every time I see something by her at the bookstore, I snap it up. I actually had no idea that this book was out (It came out in June) until I happened to spot it on the publisher’s website. Shueisha has a really great site (in Japanese) at www.s-manga.net where they let you preview the first chapter in most of their upcoming manga releases. For books like this, that are collections of one-shot stories, it means I was able to read the whole first story before deciding to buy the rest of the book. And look at this cover! Isn’t he awesome? I love that guy’s smirk! That is a great expression ^_^ There are 5 stories in this volume, and while the first story is the one that prompted me to buy this (along with who the author is), the second story is actually my favorite. These are fluffy cute high school romance stories.

Okay, so, that first story I was able to preview online? It’s a teacher-student story! Oh hohoho! Can’t resist those! While this actually isn’t really super romantic, actually, it is still very funny and cute, and unexpected. The student is a 17 year-old girl named FUJIWARA Kayo. Her main hobby is games. She is always playing her handheld (It looks a lot like a PSP) in class. One day, her teacher, a handsome, but kind of mean-looking guy named HAIBARA-sensei, catches her playing it in class, yells at her, and confiscates it. Grr, stupid Haibara-sensei, always ruining her fun! Kayo can’t stand him, and doesn’t understand why he is so popular with all the other girls at school. Ah, but Kayo is in for a surprise! When she goes to Haibara’s office after school go get her game back, he greets her there with a sinister smirk on his face. He doesn’t look inclined to return it to her. Ah, what a creep! And wait a minute, he says he will give it back to her… in return for a favor?! Visions involving sexual harassment or torture flash through Kayo’s mind, but instead it is something much different — he wants to play video games with her! In fact, he has a PSP also, and by the crazy sparkles in his eyes, he really admires her skills, and wants to play some games with her!

Wow, what a way to ruin a cool image! It turns out Kayo’s teacher is quite the PSP/handheld otaku, and his enthusiasm about playing is very cute. As they bond over video games, will there ever be a chance for anything… more?

The second story in this book is my favorite, and had me feeling all warm and fuzzy and happy while reading it ^_^ It’s about a shy girl named ICHII Ekko who has a great imagination and a talent for drawing. Every day at school she fills her lined notebook with drawings, complete manga stories, about the people around her. Most of these stories are little romance shoujo manga stories involving herself and any random cute guy she sees. She can turn any minor interaction into a silly shoujo manga plot, complete with sparkles and flowers, and a heroine that looks just like herself. For example, at the beginning of this story, she has just finished a manga page about herself and the handsome guy she wan into at the video store. Ekko’s art is very good, and I really like her panel layouts. She may be talented, but it’s not something she shares with anyone else. Her notebook is her secret, and it would be horribly embarrassing if anyone found out about it. Naturally, this story starts when just such a horrible thing happens. One day in class, Ekko has a minor collision with cute classmate Tamon-kun. He is a cute guy, and the moment they spoke to each other was brief, but notable for Ekko because that was the first time she actually spoke to him. Naturally, she needs to turn this event into a romance, and before you know it, she has drawn a little story about a guy and girl bumping into each other.

She likes her story, but she doesn’t have long to admire her handiwork, because when she gets home from school, she realizes that her notebook is missing! OH NO! She runs back to school to look for it, and guess who has it? Yeah, it’s Tamon-kun! What will Ekko do now? This story is seriously cuteness overload.

Story 3 is also a lot of fun. High school girl Naomi is excited to learn there is a new boy transferring into their class. Until this year, her school was a girl’s school, and even though it’s now co-ed, boys are scarce. So a new boy at school is big news! Unfortunately for Nao, the transfer student isn’t exactly a nice guy. His name is Katsuyuki-kun, and he’s tall and scary looking. He has an aura around him that just screams ‘do not touch! go away!’ He is like a feral cat or some other wild animal. But in spite of this, Nao doesn’t give in. She can tell something isn’t right. She figures it out soon enough– Katsuyuki is actually afraid and embarrassed to be around girls! He doesn’t hate them at all! Now the problem is how can she break though his tough exterior and make friends with him?

Story 4 is about a guy and girl who are already a couple. Rinako really likes Shun, but he doesn’t seem to want to take their relationship seriously. Even though he know it makes her mad, he is always going out with other girls. When Rinako confronts him angrily, he apologizes, but that doesn’t stop him from doing the same thing over again. In fact, he is always playing tricks on her and doing little things to boter her. Why does she stay with him? Well, she really really likes him! (not the brightest girl…) But even Rinako has her limits. When she catches him sitting with a classmate on his lap (a seat he had said was Rinako’s) she finally gives in. She’s had enough. Shun begs for forgiveness, and takes it for granted that Rinako will take him back. But when her reaction is different than her usual anger, he stops short. She’s seriously dumping him? She can’t do that, right?

Finally, the last story is a brief and funny tale of friendship, jealousy, and romance, with a bit of basketball thrown in. 🙂 It’s a fine story, but my least favorite of this bunch, so that is all I’m gonna say about it. 🙂

This mangaka keeps doing collections of one-shots. I really hope she is able to do a longer series in the future!