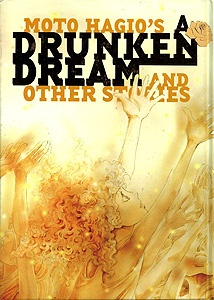 As you may know from viewing my section on 70’s and 80’s shoujo manga, I am a big fan of classic shoujo works. I love all shoujo, really, and find it fascinating to learn the history of the art form. Therefore, when Fantagraphics announced they would be publishing a collection of manga works by HAGIO Moto, I was ecstatic. HAGIO Moto is one of the most influential and important people in the history of shoujo manga. As part of a group of artists called the “Year 24 Group” she is a true pioneer. Back in the early days of shoujo, most of the stories were actually written and drawn by men. They produced a few gems, but for the most part, it was a lot of soapy romance stuff. As the 70’s dawned, women finally began to enter the manga field and they worked on shoujo manga. As part of the Year 24 Group (-also called The Fabulous 49ers because they were all born around Showa year 24, or 1949) she helped to pioneer the way shoujo stories are told and how they look. She and her contemporaries really expanded the scope of manga for young girls, creating stories with more depth and drama than had previously been done. She also is notable for her early stories involving boys love, a genre that was new and controversial at the time.

A Drunken Dream is a collection of HAGIO’s short stories sampled from various points in her career. They also represent a sample of the various genres she worked in. We have science fiction, mystery, tragedy, drama, and romance. All of the stories are gripping and seeped in emotion.

The first story, Bianca is about a famous artist who reminisces about the girl named Bianca who is the subject of many of her paintings. Who is this mysterious girl, and why is this artist so obsessed with her?

Next up is Girl on Porch With Puppy, a startling look at a free-spirited little girl and how she fails to conform with the community of adults around her. This story is brief, but it really surprised me.

Story 3, Autumn Journey, follows a boy on his quest to meet his favorite author, a man with whom he has a surprising connection.

Marie, 10 Years Later deals with the aftermath of a love triangle from the perspective of the losing side. Living life having failed to win the girl of his dreams, a man reunites with the winner in unexpected circumstances and learns that everyone wins and loses in different ways.

A Drunken Dream the namesake story for this volume, is presented with hints of color throughout. It is a sci-fi/fantasy love story that spans across time and space. The art in this story is especially beautiful. A pair of lovers always dream about each other, yet are destined to never meet. Through countless reincarnations, the results are the same. But now, in their latest incarnations, things have changed and the pattern is not the same. Have they finally thwarted fate? Will they be able to be together at last?

Hanshin: Half God is told from the point of view of one part of a pair of conjoined twins. One is beautiful, but dim, the other is frail, but intelligent. Slowly, the intelligent girl is dying, all of her bodily strength is being leeched from her by her sister, who glows with vitality.

Angel Mimic is an emotional story about a girl, wallowing in misery, who tries to kill herself with sleeping pills. Fortunately, she is rescued by a scruffy, but handsome man who helps her recover. The girl’s melancholy persists, but she slowly starts to see joy in life again, thanks to her rescuer, who turns out to be a new professor at her university. (Teacher-student! Hah!)

Iguana Girl is one of the most popular titles in this volume. It has been reprinted numerous times and made into a live action TV drama. Rika is a girl who has spent her entire life suffering under the hatred of her mother. Ever since she was born, Rika has been told by her mother that she is not really human, and that she is, in fact, an iguana. And when Rika’s mom looks at her, all she can see is an ugly lizard. The repetition of this horrible viewpoint is so constant, that Rika grows up seeing herself as an ugly iguana too. Even though her father and everyone else around her sees a cute, normal girl, In Rika’s eyes, she is a hideous monster. Talk about low self-esteem. Things get even worse when Rika’s younger sister, Mami, is born. For some reason, Mami looks perfectly normal to their mother, and thus she is showered with all the love and affection denied to Rika. It is a horrible home life, but it is all Rika has ever known. Will Rika ever be able to reclaim her self-worth and realize she is a human? Will her mother ever see her as anything other than a monster?

The Child Who Comes Home is a touching story about a family coping with the loss of their youngest child. The loss affects several members of the family in different ways.

The last story in the book, The Willow Tree is told almost entirely without dialog, but it still manages to convey a definite strong sentiment and emotional message.

As I said before, there are quite a variety of stories in this book – mystery, fantasy, tragedy, melodrama, and romance. All of the stories are stripped to a pure emotional core, and evoked a variety of responses in me as I read them. This volume really left an impression on me, and several of the stories are worth reading multiple times. The interview in the back of the book is also fascinating in that it gives a nice snapshot at what being a mangaka in the early days of shoujo was like.

I highly recommend this book. It is a wonderful example of the deep, emotional side of shoujo stories. I consider shoujo to be a demographic classification (girls) within which there are a variety of genres – from fluffy, light-hearted romance, to naughty, smutty comedy, to poignant, introspective melodrama. I admit that most of the stories I cover on my site tend to be the light-hearted romances, but I know that I barely scratch the surface of what is really out there. I am mainly hindered by my Japanese reading level. The more complicated works usually use vocabulary beyond my scope 🙂 That this collection of amazing stories is available in English, and in such a nicely designed and bound volume, is a wonderful thing, and I hope to encourage more such releases in the future.

A Drunken Dream can be purchased HERE. Go buy it now and support shoujo manga in America, this book is really worth it! (And looks great on a bookshelf, too, with its shiny gold lettering…)