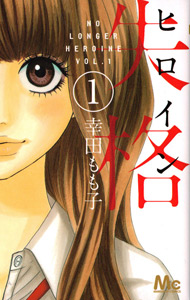 I decided to pick up this volume after reading the first chapter online at the publisher’s website. I love how Shueisha will post the the first chapter (in Japanese) of so many of their new releases for free! This practice has been wonderful at helping me decide what series to buy. Not that I am too picky anyway. I admit I am notorious for buying anything with a remotely cute cover, but having the preview chapters available help me weed out the lame stuff. Anyway, I enjoyed chapter 1 of this and decided to pick up the volume. It is volume 1 in an ongoing series. It’s still running, so I’m not sure how many books it will span, but I hope it lasts for more than 2. I think the cover art here makes the lead girl look a bit more cool and sophisticated than she actually is. The interior art is slightly cuter. This book is not smutty 🙂

The girl on the cover is a high school student named Hatori. She is a cute, and not unpopular girl. (well, she’s not popular either, so she is average, really). Hatori has a fanciful and romantic personality. She loves shoujo manga, and she has always pictured herself as a shoujo manga heroine. Or at least, the heroine of her own life. And who is her hero? His name is Rita-kun, and he is her childhood friend. Ever since an incident in elementary school when she helped him out, they have been good friends. Now all these years later, Hatori knows they are destined to be together. She is the one who is closest to him. She is the heroine to his hero. So what if he is now really handsome and always has a new girlfriend. Hatori knows that this is how it always is in shoujo manga. No true heroine has appeared for Rita, and it’s only a matter of time when he will realize he has always loved her. Just like in shoujo manga!

Ah, but what happens when you discover that you are not the heroine of your own life after all? Yes, until now, Rita has not really has a serious girlfriend. But then one day, all that changes. Hatori is right about one thing- events unfold just like in a shoujo manga. Only problem is, Hatori is not the lucky heroine. One day in class, Rita-kun unexpectedly helps out Adachi-san, a shy plain girl who is being picked on by some thug-like students. They talk a little bit, and it’s obvious that Adachi feels gratitude towards Rita, and she soon falls for him. Unlike Hatori, who is close to Rita, and has a fun, playful relationship with him, Adachi is more direct with her feelings. Even though she is supposed to be the shy one, she confesses to Rita, and asks him to go out with her. To Hatori’s shock, he agrees! Hatori, who has liked Rita for so long, and has waited for him, has been outmaneuvered by a shy, plain girl! Of only Hatori had confessed!

So now Hatori is trapped on the outside, while Adachi is in her place. Adachi is the one who is like a typical shoujo manga heroine- the plain girl going out with the hot popular guy. But if you are no longer a heroine, then what are you? Is Hatori being forced to take the role of the unpleasant villain? It’s hard not to fall into that position. Especially when Adachi turns out to be a decent girl with unexpected facets to her personality. Even worse, Rita seems to really care about her, and they make a great couple. Would it have even made a difference if Hatori did confess? More and more Hatori finds herself isolated and depressed. She may not be his heroine, but he is still her hero. What’s a girl to do when he’s just not that into you?