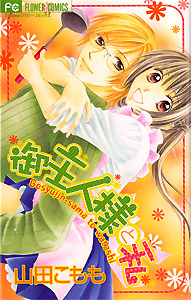 I am finally back with another summary, and what do I do? I post another maid series ^_^;; Maid stories seem to be popular in both shoujo and shounen genres, however there are some noticeable differences. The shoujo stories are more romantic, and the heroine usually doesn’t have huge cleavage spilling out of the skimpy maid uniform XD The guy is usually cuter too ^_^ Komomo Yamada is good at this kind of story. She also has a couple of teacher-student series that are a lot of fun. She knows the common shoujo manga plot devices and makes good use of them ^_^ This is a collection of short stories. The main couple on the cover take up two chapters (the first half of the book) while three other stories fill the second half. All of them are very cute!

Our cover heroine is HAMURA Kanae, a high school girl who is forced to support herself after her parents pass away. In order to still be able to attend her fancy high school and to support herself, she takes a job as a live-in maid at a very nice high rise apartment, working for the son of a major corporation. Naturally, she is surprised to discover that her new employer is one of her classmates at school! His name is HOTSUKA-kun, and he deliberately asked the school chairman to place Kanae as his maid when he heard about her poor circumstances. Now, having read so much shoujo manga, I admit that I had pre-conceived ideas about how the hero of this series would turn out to be, and I was pleasantly surprised to see him not be the way I thought he would be at all ^_^ This is a fun little read, and is relatively non-smutty too! (just one panel in the whole book, really).

The next story’s heroine, Maiko, is put in an uncomfortable position when Aki, the guy she likes (and who rejected her) ends up moving in with her family when his parents go overseas. Aki is a strange guy who likes to tease her, and she never quite knows what to think of him. At one point he even says she is his pet! Poor Maiko doesn’t like being toyed with, but there is no escaping him now that they live together. What are his real feelings?

Story 3 is a classic love triangle. Ryou-chan and Tomoko-chan are childhood friends and have been best friends for years. And for years, Tomoko has had a crush on their mutual friend Hide-kun. For a long time, Ryou supported Tomoko in her endless pursuit of Hide-kun, however, now it is becoming difficult because Ryou finds she is in love with him too… Not wanting to hurt Tomoko, Ryou tries to distance herself from the couple and denies her feelings, but she can’t help liking Hide-kun. Naturally the question is who does Hide-kun like? ^_^

In the final story, Kanou-chan and Hayama-kun are classmates who always fight. Hayama is a horrible tease, peeking at Kanou’s panties and generally annoying her and bullying her. Kanou’s friends think they should already just start going out as a couple since they are such a good pair, but Kanou-chan violently refuses to even think of Hayama-kun. He isn’t her type at all! She likes mature, handsome, smart older guys like Katou-sempai. Fortunately for Kanou-chan, Katou-sempai hears her declaration, and agrees on the spot to go out with her! Kanou-chan has an unexpected boyfriend! But how will Hayama react to this development? Seeing Kanou-chan dating Katou-sempai doesn’t make him happy at all…

As I said, these are all cute, very shoujo-ish stories. One thing this author really seems to like is a jealous guy. In all four stories, the heroine is shown talking to another guy, only to be dragged off by a jealous hero. A fight usually ensues. It’s cliche, but still very adorable ^_^ If you like short, fluffy, feel-good shoujo, check this book out.