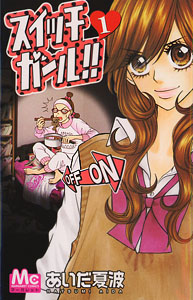 Wow, 2 reviews in one day! I must be excited about going to Anime Expo this week 🙂 Anyway, This is such a fun manga! I purchased it after reading a brief preview, and I am glad I did! The art is cute and the situations and characters are very funny! I don’t think I have talked about any other series by this author before, but after reading this one, I am looking forward to more of her work. This appears to be the first volume in a series, and it is, so far, non-smutty! The style of comedy is very exaggerated, and sometimes the way the characters are drawn remind me of shounen manga. Or maybe shounen manga drawn by a shoujo artist ^_^ Anyway, on with the story…

TAMIYA Nika is a beautiful, outgoing, popular high school girl. She has just the right look, just the right fashions, and is everyone’s friend. What everyone at school does not know is how hard Nika works to keep up this perfect image, and what she is REALLY like at home. When not at school, Nika is a scary, sloppy, tight-fisted girl who wears glasses, an ugly sweatsuit, and has her hair pulled back into unattractive buns. She lays around playing video games and reading manga (ack, sounds like me…). Her attitude is bossy and cranky, and she travels far out of her way to shop where she won’t be recognized.

Every day, Nika “Switches On” with a strict regimen of beautification that involves primping and plucking and careful dressing. When she leaves for school she sparkles and smiles, and no one at school has any idea about her true nature. (Nika’s two sides reminds me of the heroine of KareKano). The only person who knows about Nika’s Switched On/Off modes is her best friend, who is also aware of the reasons behind the changes.

However, soon a second person finds about about Nika’s personalities – someone who has his own On/Off switch, but in reverse! His name is KAMIYAMA Arata, and he is a recent transfer student. He meets Nika when she is in OFF Mode, and then again at school when she is ON, and quickly makes the connection, much to her horror. However Nika can see that he has his little secret. At school, Arata wears thick swirly-eyed glasses and messy hair that make some bullies think he is an otaku. However, at home, he ditches the glasses and is downright gorgeous! He is just the opposite of Nika, but why?

Now that they know each other’s secrets, they form a strange relationship. Nika blindly continues her habit, changing modes from school life and home life, while he finds her to be a very amusing person the more he watches her antics. Nika has had some romantic failures in her past, Could Arata be the one for her? This is a wacky comedic manga!