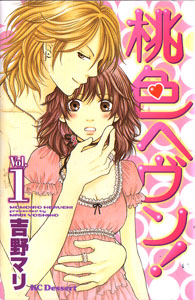 You know, it’s kind of amazing how many shoujo and yaoi manga have plots that revolve around erotic novelists. Seriously, I think I have at least three summarized on this site already, and here is yet another! Ok, so the plot isn’t the most original, it manages to include many of the usual shoujo manga Plot Devices, but still… I can’t resist this. It’s cute! Um… all I can say is that this is yet another guilty pleasure ^_^;; This volume isn’t exactly smutty, though they sure do talk about it a LOT and there are some vivid descriptions of smutty situations. I am pretty sure that future volumes will get smutty. But for now, we can just wait and hope 😀

Er, ok, the plot. There is one, sort of. Really! ^_^; Momoko is a high school girl with an unusual occupation. Well, then again, she is in a shoujo manga, so her occupation isn’t all that unusual… she is an erotic novelist. How exactly did she become one? Well, she sort of inherited it. Her father, a famous novelist, passed away, and in order to support her family (consisting of a younger brother and hospitalized mother), Momoko has become a ghostwriter, writing novels under his name. I guess it’s only in Japan that a publishing company would ask a schoolgirl to write erotica, but okay… it makes a good story 🙂

Because of her unusual occupation, Momoko is always very busy and doesn’t get to do all the fun things her classmates do, and is often really worn out and tired from writing into the late hours of the night. She must keep her work a secret, and leading the double life is very tiring. This busy life means Momoko is so out of touch with what is popular, that she has no idea why all the girls in her school are suddenly so excited over the news of a new transfer student. It turns out that the handsome, almost angelic guy who has entered her school is none other than Ranmaru, an extremely famous supermodel. All the girls are dazzled by him, and he smugly has no problems enjoying their attentions. He is quite a playboy.

Momoko is impressed by his good looks, but really, all this fuss has nothing to do with her, she has too many other things to worry about than some supermodel. Of course, this being a manga, Momoko and Ranmaru will end up encountering each other. Rather, it is Ranmaru, who, through a series of unlikely events, discovers Momoko’s secret occupation! Ranmaru thinks Momoko is a very interesting girl, and decides to take advantage of his knowledge by making Momoko his slave!

Poor Momoko, as if her life weren’t already complicated. Things are just getting started….