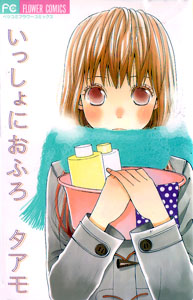 I have been picking up a lot of manga by this author, Taamo, recently. I really like her art style. It is very distinctive. I can tell right away when browsing the bookshelves if something is a Taamo series. The cover artwork is sort of light and delicate and feminine, and usually has a lot of white space in the background. Very cute! As far as I can tell, she has only done one-shot volumes or collections of one-shot stories. I hope to see a longer series from her! This book here, ‘Bathing Together’ is also a collection of one-shot stories.

The first story is the one that matches the title of the book. It is about a girl named sana who is stuck in the inconvenient situation of having a non-working bathroom at home. Until repairs are done, she and her brother have to go use the local public bath house. While Sana’s friend Mako thinks this must be a huge pain for Sana, Sana herself doesn’t mind too much. Besides, there is an interesting person at the bathhouse. Every time they go, Sana always finishes her bath first and has to stand around outside, waiting for her (hilariously narcissistic) brother to finish his bath. Usually when she waits, she is joined by a strange guy, who is also waiting for someone to finish. He is cute in a ‘silent type’ sort of way. Sana has never spoken to the guy, but they often exchange glances, acknowledging each others presence. Sana thinks he is strange, and wonders who he is waiting for. She doesn’t know who he is, but she thinks she is starting to like him… Unfortunately, things take a turn when Mako excitedly drags Sana to go see the guy she has fallen for. Because Mako previously went through a harsh breakup and never thought she would like anyone again, Sana is happy for her friend until she realizes… yeah, you guessed it…. the guy Mako likes is the guy from the bathhouse!
What is Sana to do? It’s not like she has any claim on him– they have never even spoken. But her feelings for him…

The next story is about an amusing case of mistaken identity. Every day at school, Hina-chan observes all the girls in her class going wild over the very handsome Andou-kun. He is the type that sparkles everywhere, causing his fans to “kyaaa!” in delight. It makes Hina sick. She, on the other hand, likes her classmate Shimizu, and she thinks he really likes her. She is waiting for him to confess to her, but unfortunately, she waited too long. Instead of confessing to her, he tells her that he has found a girlfriend. He used to like her, but thought she hated him, so he ended up falling for someone else. Hina can’t believe it. She missed her chance! Totally depressed over this, she goes to a local planetarium and watches a show about the planets and stars. She is surprised to discover that the weird guy in the seat next to her making shadow puppets with his hands is none other than Andou-kun! Why is he there? After the show, Andou is just as surprised to see it was Hina sitting next to him. He had no idea that Hina was really his email/texting penpal “Athena”! He was supposed to meet her there for the first time, and he never guessed that it would be Hina from his school! Now, Hina actually ISN’T this “Athena”, but how can she break that to Andou, especially when he looks so excited and cute? It’s very different from his sparkly personality at school… and what happened to the REAL “Athena”?

Next up is an adorable story about a naive “oujou-sama” or wealthy girl, and a part-time Santa Claus. Kanta-kun is an average guy working a part time job selling Christmas cakes. The job requires him to dress in a Santa outfit (minus the padding and beard) and stand out on the street, trying to get customers to stop and buy. One day he witnesses an old guy harassing a cute girl, and he steps in and drags her away, saving her. The girl, Seno, really likes Kanta-kun, and soon he can’t get rid of her. She insists on calling him “Santa-san” and she comes to visit him a lot (usually accompanied by her servant, the old man he “rescued” her from). Kanta-kun puts up with her antics, and soon Seno’s cheerful, naive ways, begin to charm him. Can she restore the Christmas spirit to this scrooge of a Santa? I like this story because it is told from his point of view.

Finally we have a sweet story about a girl going to her middle school reunion. Her boyfriend is driving her. On the way there, she finds herself lost in the memories of her past love, a childhood friend, and their innocent, cute love story. Will she see him again at the reunion? What about her current boyfriend?