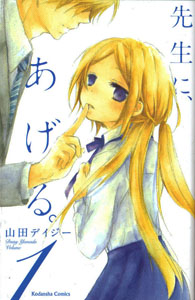 Because I obviously don’t talk about enough teacher x student manga on this site, here is yet another one 🙂 I picked this one up not just because of the teacher-student theme, which is a guilty pleasure of mine, but also because this book is by YAMADA Daisy, an author whose works I have enjoyed before. There is something about her simplistic but cute art style that I like. It isn’t exactly all solid-lines and clean, but it’s not all messy/scratchy either. I think she strikes a nice balance with her slightly wispy style. This is the first volume of an ongoing series. I believe it’s being serialized in Nakayoshi, so don’t expect anything smutty here. However, the story is very cute, and I am curious to see how it will all work out.

TANAKA Azumi is a 14 year-old middle school student. To me, she certainly looks cute enough, but apparently she is not very popular at school. She is a bit of a nerd and teacher’s pet, and is considered uncool, unfashionable (she wears her school skirt very long), and boring by her classmates. In particular, Azumi’s female classmates are mean and catty to her, not liking when anyone is nice to her. They put her down and bully her, and Azumi is too shy to do much of anything about it. Her voice is hesitant and soft. In fact, Azumi buys into their taunting, believing herself to be completely uninteresting. Even when one of the most popular boys at school, Jyou-kun (Who I am just gonna call Joe), a carefree, super-friendly-to-everyone type of guy says something nice to Azumi, all she can do is make her escape.

In spite of all this, Azumi does dream of falling in love some day, and she does have one good friend, her older sister. Unfortunately, her older sister is sick, and sometimes needs to be hospitalized for a while. Now is one of those times, so Azumi visits her at the hospital. Azumi’s sister is Azumi’s opposite – beautiful, kind, smart. Azumi’s sister can tell that Azumi is feeling down, so to cheer her up and convince her that she will one day find romance, she makes Azumi dress up in one of her fashionable dresses. Azumi does look very cute in it, and much older than her real age. On her sister’s orders, Azumi ventures out of the hospital to take a walk.

Azumi wanders around in the fancy dress, feeling both a little awkward and a little carefree at the same time. Unfortunately, her happiness is dashed when a thief grabs her purse and runs. Azumi manages to tell “Thief!” loud enough to attract the attention of a passing stranger, who kindly chases after the thief and recovers the purse for her. Conveniently enough, the stranger is totally cute! He’s a young guy, about college-age, so maybe early 20’s. He is cheerful and friendly, and Azumi feels gratitude towards him.

His name is MIZUSAWA Makoto. He’s really nice. The incident with her purse, and later on an incident where she helps him find a lost key, gives them time to become friends. Azumi is charmed by his smile and friendliness, and quickly finds herself falling for him. She must feel some empowerment from wearing the nice dress, because she manages to work up the nerve to get his cellphone number, and she later visits him at his apartment to bring him some cake to thank him for helping return her purse. They spend some time together, Azumi falls for him some more, and when the day ends, she works up even more courage to give him a kiss before saying good-bye, thinking she is never going to see him again.

Oh come on, you know what’s going to happen now.

The following Monday at school, everyone is all abuzz over the arrival of a new teacher. He’s smokin’ hot! Naturally, this hot teacher is none other than Makoto! Oh my, the power of coincidence in shoujo manga land is amazing! Azumi is shocked to see him at her school, but also thinks this is an answer to her prayer to see him again. She can’t believe she gets to see him again so soon!

As for him, he is equally surprised to see her, not to mention realize how young she really is (oops). Makoto has the proper and expected reaction to this situation — they can only be teacher and student, nothing more. He actually has some ethics, and no matter how he feels about Azumi, she is a student, and therefore off limits. Nice try, we’ll see how long that lasts. He is not totally unaffected by Azumi, but he is very good at keeping her at arm’s length. Will Makoto and Azumi end up together? But wait, the super-friendly and popular Joe-kun may also actually like Azumi as well. Joe is totally adorable too, and he also helps Azumi out of a bad situation. I sense a love triangle forming~ 🙂

This is a fun story, and is totally the sort of thing can only happen in shoujo manga land, where it all is cute and romantic instead of real life, where it would be creepy and illegal. ^_^;;