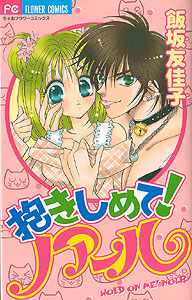 Just what I have been waiting forever for! A manga with a catboy! There aren’t that many series that feature catboys. It’s always catgirls catgirls catgirls everywhere. Whenever I find a manga with a catboy in it, I just have to get it ^_^ Even better, this series is by IISAKA Yukako, one of my favorite mangaka. She likes doing ‘magical boyfriend’ series where the heroine gets some sort of famous or supernatural boyfriend (idol star, vampire, etc) so I am thrilled that she released a catboy series! Her art style is so cute, and her boys are so hot. I like em with fangs! ^_-

Like most shoujo heroines, Suzu is a typical schoolgirl. She loves animals, especially cats, and is a kind, generous girl. One day, when walking home from school, a black cat falls from a tree branch above her and lands on her head. Suzu is startled, but realizes the cat is injured and needs help. She takes the cat home and bandages it up. The cat is all black, and sort of fluffy. It wears a collar that says ‘NOIR 125’. The cat falls unconscious, and soon Suzu falls asleep next to it. A while later, Suzu wakes up, and is understandably shocked to find that she no longer shares her bed with an injured black cat, but instead with a naked bandaged bishounen! He has black hair and wears a collar. Suzu reacts badly to his presence, and he tries to explain that he is actually Noir (‘But you can call me Noa!’) the black cat she rescued earlier. Suzu doesn’t want to believe him, but when he transforms to cat form right in front of her, she has no choice but to believe. Noir is very cute, and he likes Suzu a lot. In fact, he declares that he wants to have children with her! (Talk about moving fast!) Suzu doesn’t take him very seriously, however Noir is very serious about his affection for Suzu. They face several hardships together, from attacking cats, catboy rivals, a surprise fiancee, and more. Through it all, Noir is devoted to Suzu, though she has some doubts. This is an adorable one-shot volume that IISAKA Yukako fans shouldn’t miss!