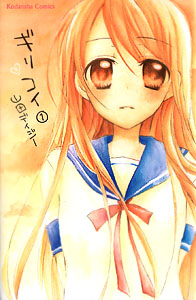 This is another one of those series that I passed up several times at the bookstore before buying it. It always caught my eye, and I picked it up several times, but always ended up distracted by something else. Finally, I decided that I obviously really wanted it, since I kept coming back to it, so I broke down and bought it at last 😀 I am glad I did. Even though the cover (while very cute) looks sort of melancholy to me, the story itself is very funny and sweet. The art style is simple and attractive, and (can I say it yet again) CUTE! This cover is very eye-catching, and I like the way that the title looks like handwriting. This is volume 1 of what I hope will be a decently long series.

TOMINAGA Mao is a cute girl with long hair and a bright personality. She is just entering junior high, but she is at a school that none of her friends from elementary school are attending. So even though she is a fun girl, she is all alone in a new school, and feels a bit lonely. Well, that is, until she sees what looks like a bunch of upperclassmen boys picking on a freshman boy. Without thought, Mao rushes in to help, shouting at the older kids, and dragging the bullied boy away, saving him!

Or, maybe not. There is one slight problem here…. the boy, Riku, was not being bullied! Ooops…. everyone is very amused by Mao’s enthusiasm, and call her brave. Horribly embarrassed, she runs off to class, only to be greeted by a roomful of strangers who all seem to already have their own cliques. She feels like an outsider, and wonders how she will be able to make friends now.

She doesn’t have to wonder long, because before she knows it, Riku has shown up at her classroom looking for her. When he finds her, he proclaims her to be his “Prince!” and eagerly introduces her to the entire class! Riku doesn’t mind being the rescued “Princess” in this scenario. While extremely embarrassing, this act does manage to gain Mao some attention, and her new classmates are now interested in getting to know her. It seems that Riku is very popular, and he just provided Mao with a means of making friends!

As the days go by, Mao makes some friends in her class, and soon becomes good friends with Riku, too. Riku is her school’s soccer ace, and has a bunch of girls drooling over him (of course!) Mao likes Riku’s lively personality, and soon thinks she might be falling for him. However, he only seems to see her as a good friend, his “Prince” and doesn’t see her as a girl.

In fact, he might even have a girlfriend! Poor Mao has an unrequited love for Riku. Even worse, his girlfriend is cute and nice. Mao struggles to behave normally around Riku, but it is very difficult, especially because Riku, who is often kind of dense when it comes to girls, manages to have flashes of insight at inconvenient times. Will he ever realize how much Mao likes him?

Agghh the art in this is so adorable! I love Mao’s hair and her funny expressions. I look forward to reading volume 2!