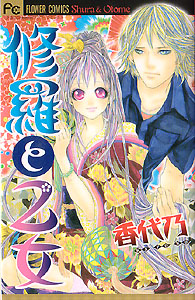 Ahh, this is the third of my three volumes of Kayono stuff. This book has two stories. The first takes up almost all of the volume, and is set in the modern world, but with a lot of supernatural stuff going on. The second story is also set in the modern world, and, amazingly enough, nothing supernatural happens in it. But wow, it’s just full of nekkid bodies. So if you can’t handle tons of sparkly censored nudity and other… things that sparkle (*cough*) then you may want to skip the second story ^_^ As usual, Kayono’s artwork is very detailed and manages to be manga-ish and realistic at the same time. Great stuff!

The main story is a angsty, somehwat violent romance. The hero, Shiryuu shows up one day at the home of the heroine, Komomo. Her home is a very traditional Japanese style home, and her family apparently specializes in the art of Noh, or maybe Kagura dancing. (I am not quite sure what type of dancing it is ^^;) It’s the graceful dancing using fans. Komomo teaches the artform at her home, and Shiryuu has arrived to take lessons. … or has he? Right away he displays an unusual skill at the dance. He obviously needs no instruction. He also has a mysterious knowledge of Komomo’s mother, who died when Komomo was small. She has been raised by her strict, unloving father who often abuses her. Shiryuu seems fascinated by Komomo. Her long long hair attracts him, as does her gentle personality and, well, her huge chest size ^_^;; It is not long after Shiryuu’s arrival that he manages to catch Komomo’s father beating her, and puts a stop to it. However her father is not easily defeated, and he takes a violent revenge upon Shiryuu that ends up revealing that Shiryuu is not as he appears! How does he know about Komomo’s mother? How did he survive the violent attack by Komomo’s father? Why is he so obsessed with Komomo? Wooo 😀

The second story in this volume is a very silly piece about a girl named Ami who is a model, and is all set to do a series of nude photos, but she can’t get over the embarrasment of being nude in front of the camera. She practices walking around nude at home, and even poses in front of mirrors. But when she gets in front of the camera, she freaks out. Then she meets Ryuuichirou, her new neighbor. Their meeting is very unusual! He simply rings her doorbell, and she answers in the nude, having forgotten to put her clothes on. She is so stunned by his cuteness, that she forgets that she is naked, and actually stands there having a conversation with him in the nude. She is shocked when she realizes what she did. Things get even more odd when she discovers that Ryuuichirou likes to lift weights up on this platform on their roof while in the nude too! Ami ends up spending lots of naked time with Ryuuichirou (and 5 of his friends, oh my!). This is a very silly, sparkly story!