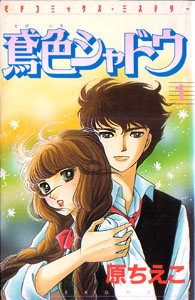 Okay, stepping back in time a little bit for this entry. This is a comic by HARA Chieko, an author who has a rather large body of work, all shoujo, though a lot of her recent work has been josei, including some manga versions of Harlequin novels. She has been publishing manga since 1976, and her most recent volume was published in 2007. Her style is still very much of the 70’s shoujo sort of style. It is very pretty and expressive. This particular series ran for 4 volumes from 1992 to 1994. It is a supernatural romantic mystery.

It all begins long ago in the past. In a place near an ancient wall. The wall looks more like a cliff, really. Anyway, two cute children grew up together. Sumire is a gentle girl, and Yasuhira is a bossy boy, but he loves Sumire. When Yasuhira proposed marriage to Sumire, it was more like the confirmation of a long-held assumption that they would eventually wed. But they did lot live happily ever after. We see a bloodied sword, and someone crying…

Flash forward to modern times. These days, a school has been built near the ancient wall. It is such a tall, imposing wall/cliff thing, that naturally the students have made up ghost stories about it. Some of the girls are determined to go to the wall, where they believe they can see some real ghosts. A classmate, Sumire, is unwillingly dragged along. Sumire tries to get out of going, but her friends insist. When they get to the wall, Sumire feels an unusual wind, and then is confronted with a startling sight — a boy crying. He is just standing there, tears pouring down his cheeks. Before she can say anything, her friends call her away. The boy looks startled to see her. Sumire realizes he looks familiar… is that her classmate Katsuragi-kun?

Sumire is a studious-looking girl, and is her student class representative. Due to an illness back in elementary school that kept her out of school for a year, Sumire is a year older than all of her classmates. Thus, they look up to her like a big sister. Yet she is not exactly a shy person either, and she isn’t afraid to ask around trying to find information on Katsuragi.

Ever since the day at the wall, she keeps thinking of Katsuragi and his tears. He, meanwhile, acts as if nothing happened. Sumire discovers that he is a descendant of the Katsuragi Clan, a group that lived here for ages. She also discovers that Katsuragi-kun is doing research in the library on his clan. Why does she feel so drawn to Katsuragi? She could be falling for him…

Sumire ends up going back to the wall again, this time by herself. Sure enough, Katsuragi is there. But something is wrong. There is a strange aura… a strange GHOST that appears to have taken up residence in Katsuragi’s body. The ghost has long hair, an old traditional kimono, and tears running from its eyes. Using Katsuragi’s body, it lurches towards Sumire, calling to her by her first name. Is it trying to kill her?

But before Sumire can do anything, she blinks and realizes it’s just Katsuragi standing over her. What… did she hallucinate? Pass out? They both wonder what the other is doing there, but when Sumire admits that she heard and saw a strange thing calling out “Sumire” to her, Katsuragi admits that he has been seeing and hearing things at the wall too. Ever since he started school there, he has felt strange and when he is by the wall, he can’t control himself and he starts crying. Katsuragi is very embarrassed about all this, but Sumire doesn’t laugh, and she comforts him. Considering she has seen some really odd things there too, she understands.

Sumire thinks Katsuragi, being a descendant of the Katsuragi Clan, must be possessed by a ghost of one of his ancestors. Katsuragi is skeptical, but together they start to try and unravel the events of the past and figure out what is going on. Of course, this doesn’t go unnoticed by their classmates, who tease Sumire for being with a younger guy.

As they investigate further, Sumire discovers the horrifying truth about what happened in the past, and they soon discover there is more than one ghost at the wall, and that there are other classmates involved in the story…

This series starts as a serious ghost-mystery sort of story, but starting with chapter two, some humorous elements start to creep into the plot, thanks to one of the ghosts. There are also some rather horrific moments, so I suppose the comedy bits help lighten the mood a little. At any rate, this is a very enjoyable series with many twists, turns, and ghosts! 🙂