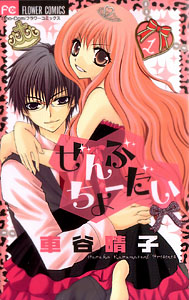 Wow. I just realized I don’t have any series by KURUMATANI Haruko on my site here yet! How can that be? I know I have a bunch of her books. I could have sworn I covered at least one of her titles here, but when I checked, I couldn’t find anything. Even though her plots can be kind of average, I still like this author. I think her artwork has improved over time. This is a fun story with a familiar plot, but the characters are cute. I especially enjoy how we get a glimpse into the hero’s point of view sometimes.

Our heroine is the mighty SAKURA Himeko. She is slender, beautiful, smart, good at sports, and is an all-around perfect person. Seriously, she excels at everything she does. Himeko even has a club of worshipping boys who all admire her! But none of these boys can match up to her, and are not worthy of being her boyfriend. She wants someone as great as she is. I know this sounds horribly egotistical, and yes, she can be that way sometimes, but she is also kind, generous, and has a ‘fighting for justice’ streak in her too, that prompts her to do good things.

When Himeko ends up having to transfer to a new school, she looks forward to both becoming the queen of her new class (gaining a new court of followers) and maybe finding a boyfriend. And sure enough, at her new school, she is quickly acknowledged to be an outstanding student. An example for others to follow. A perfect girl.

But then Himeko bumps into HIM. This very handsome guy. This…. perfect guy! His name is OOZORA Ren. And wow, he is handsome! Himeko thinks that he might be the guy for her! When he doesn’t immediately seem dazzled by her, Himeko (in typical arrogant mode) tells him that she will defeat him and make him kneel before her!

But for once, things don’t go according to Himeko’s plan. In fact, she is being thwarted and defeated at every turn. By Ren! Himeko is used to being at the top of the class, but not only does Ren consistently beat her test scores, he also defeats her in sports! Even worse, he discovers her one weakness! Ren’s personality is so horrible! He seems to enjoy Himeko’s loud antics, and he has fun teasing her about how she must be in love with him. As if! No way! What a horrifying thought!

All of this is so frustrating for Himeko! Yes, she wanted a guy as good as she was, a PERFECT guy, but this guy is actually beating her! Could he be… better than her? But Himeko has a very stubborn and willful personality, and she refuses to give up!

As for Ren, Himeko is certainly an interesting character! She has made high school more interesting, so now instead of skipping, he actually attends. And once he realizes that there is more to Himeko than her bossy, arrogant, egotistical ways, he starts to fall for her. But he could never let her know that, right?

So, um, yeah, not the most original plot (KareKano and Special A come to mind) but this is still a cute, fun little series. 🙂