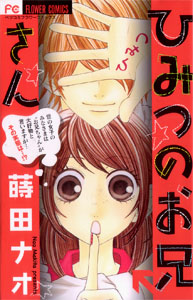 Oops, I have had my days mixed up this week, what with the holiday coming! I totally forgot to update last night. As for Christmas, I am not sure yet if I will remember to post an update, but I will try ^_^ Anyway, this is an absolutely adorable collection of one-shot stories that originally ran in Betsucomi. While they do rely on many standard shoujo manga plot devices, there is something about this book that I find extremely cute. Aside from the great art (hello, cute boys here!) I like the wacky way that the heroines overreact to things. And yes, they shift into 70’s shoujo manga mode when they freak out, so this makes me like this author more! This book is divided into 4 stories.

The first is the one that the book is named after, “Himitsu no Oniisan,” or “Secret Brother”. Many situations in this standard plot are familiar – Our heroine is an average high school girl. She isn’t unpopular, but she isn’t part of the “in” crowd either. There is one boy in the class that all the girls worship, Touma-kun. He is handsome and smart, and is known as the class “prince”. Man, seriously, Japanese high schools are filled with princes! Back when I was in high school, I don’t think any of the guys would have liked being called the Class Prince ^_^ Anyway, Touma is very polite and gentle with his flock of female groupies. He really does look like a prince. This is why our heroine, Kotoko, is thrilled when she learns that the woman her father is marrying is none other than Touma’s mother! Touma the class prince is going to be her new big brother! But Kotoko’s joy fades fast when she discovers that Touma’s princely good charm is just an act, and his real personality is mean and haughty. He wants nothing to do with such an uncool girl like Kotoko, and he is only going along with this marriage thing because his mother is so happy. Touma does not consider Kotoko to be his sister, and he threatens to kill her if she blabs about their new relationship. Yes, this story sounds sort of like a cross between Marmalade Boy and Itazura na Kiss. Heck, the heroine is even named Kotoko. But there are things about this Kotoko that I like a lot.

The next story also involves an “average” high school girl, but her situation is much more dramatic. One day Rika-chan comes home from school to discover that “surprise! you are getting married!”. Wait, what? Well, it turns out that her father has landed into some trouble at his work, and the result is that he has essentially sold off Rika-chan in marriage to the son of a country/farming family. Rika is shocked, but has no choice to obey. She is forced to quit school and move to the country, where she will live as the future wife of the son of the house. The son is a scary looking guy named Souichirou. He has long, shaggy hair that covers his face, and he is sort of quiet and dangerous-looking. Rika can’t believe this is happening. What has become of her nice, normal, high school life? She can’t marry this strange guy! But Souichirou has a certain gentle charm. In fact, he may not be as scary as he looks. But she can’t marry a stranger, right?

Story 3 is the fun and frantic tale of Umi, a high school girl that just wants a boyfriend above all else. Everyone at her school is in ‘love-love’ mode all paired up with boyfriends except for Umi. She just can’t hold onto a guy, and she is the only one left all alone. It doesn’t help that her boss at the cafe she works at makes fun of her, and isn’t surprised that she can’t get a guy. But when Umi hears the rumors of her boss’s supposedly legendary skill at giving love advice, she ignores his teasing and begs him for help in getting a boyfriend. He, being a rather surly guy, resists at first, but eventually he helps her out. And hey, it seems to be working! There is a kind, handsome boy that Umi meets at a karaoke party that seems to like her! Umi starts to like him, too, but will she be able to hold onto him? Will her boss’s love advice work?

Finally, we have a hilarious story of Chiyo, a 17 year-old second-year high school student who also doesn’t have a boyfriend. She isn’t quite as desperate about it as Umi was, but when a tall, handsome guy suddenly confesses to her at a bookshop after school, Chiyo is so dazzled, that she almost reflexively accepts the confession, and she suddenly has a boyfriend! Ahh, she is so happy! Kaoru is so tall and good looking, and seems genuinely in love with her! Chiyo’s friends are a bit surprised by this turn of events. They all assume that because Kaoru doesn’t go to their school, that he must be a college student. He certainly looks like one! Chiyo is set to meet Kaoru for their first after-school date when she discovers the shocking truth — Kaoru is not a college student. In fact, he is not a high school student. He is a… junior high student! AND he is a *1st year* junior high student! That is like, 3 or 4 years younger than Chiyo! Oh, this is horrible! Chiyo can’t believe it! And after being with him, Chiyo can kind of see the age difference in some of the things he does, like give her bread for snacks, and a cute mobile phone strap that he won at an arcade. But then, in contrast to the childish things he does, there are times when he is very mature, and his feelings for Chiyo seem deep. Poor Chiyo wrestles with the fact that she is really starting to fall for this much younger guy! But what if her friends find out! They laughed a lot at another girl who was asked out my a 3rd year junior high kid, and Kaoru is only a 1st year! Can Chiyo and Kaoru overcome their age difference?

All of these stories are very sweet and fun. At the very end of the book is a short extra comic that has all the characters meeting together. I think they are arguing over which story should be the one the book is named after. Well, it’s obvious who won 😀 But it is fun to see all of them together.