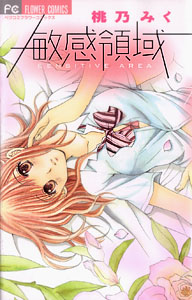 Heh. As you may have guessed by the cover, this book is a slightly smutty one. Actually, it is not as smutty as I thought it would be. It is really just a little naughty here and there, and there is nothing explicit like you would find in a yaoi manga or anything, but it is a little more ecchi than some of the other books I have been reading recently. I bought this one for the cover and for the title. “Sensitive Area”? Yeah, I just bet she has some sensitive areas, ^_^;; I really like this author’s artwork. It is simple, clean, and has this very cute quality to it. This is a one-shot volume, containing 5 short stories.

Story number 1 is about a girl named Riho who is suffering from some relationship anxiety. All around her, she sees girls talking about their boyfriends, and couples in relationships. But Riho can’t understand what is so great about it. She had a boyfriend in middle school, and when he tried to pressure her into sleeping with him, she got scared and refused. He called her a “boring girl” and dumped her. To have someone you care about say such a mean thing has turned Riho off to boys and relationships entirely. Thus, when Suzuhara-kun, the handsome student council President, confesses his love to her (Riho is the Vice President), she doesn’t know what to do. She doesn’t hate Suzuhara, he is handsome, and kind, but she is scared to let anyone close…

Story 2 follows the struggles of Nanami, a girl who has the greatest after-school task ever — seeing the guy she loves. His name is Hiro, and he is a college student, three years older than Nanami. Hiro, or Hiro-nii (big brother) as she calls him, is her childhood friend. Nanami was asked by his family to keep an eye on him and take care of him, and she takes her task very seriously. Every day she gets him out of bed in the afternoon so he can go to his evening job. Hiro is handsome, and seems to care about Nanami, but in very much a “bothersome little sister” sort of way. Lately, Hir has seemed different than usual, and Nanami is getting worried. Does he have a girlfriend? Did he lose his job? One evening, she decides to follow him, only to discover that Hiro’s evening job is actually as the Number 1 host of a Host Club!

Next up is a fun, is silly and implausible teacher-student story. It’s the first day of school, and, as is expected of shoujo manga heroines, Mao is late. Fortunately, she has someone there to make sure she gets out the door on time — her childhood friend Keiichi. Actually, he is a little bit more than a childhood friend. Kei-chan is 8 years older than Mao, and he is actually her husband! Mao has loved Kei-chan for as long as she can remember, and amazingly enough, he loves her back. As soon as they could, the got married! But with Mao in high school they decide to keep their marriage a secret. This is especially important, as Keiichi works as a high school teacher! Fortunately, Kei has the unbelievable good sense to get a teaching job as a different school than the one Mao goes to. I was honestly amazed by this twist. Usually, they end up at the same school, and all kinds of problems start, but this time, the hero has a little bit of common sense (if questionable taste in child-brides ^_^;) At any rate, Kei and Mao are a cute couple, and the separate schools is not enough to prevent jealousy and worry and other relationship angst from creeping in. Will they be able to work out their unconventional relationship?

In story 3, the heroine, Satsuki, is on a mission. She is trying to find the boy who saved her life at the beach one year earlier. She had almost drowned, when an unknown boy rescued her. She never managed to see his face, because the darn guy just wet and walked away after seeing she was OK, but Satsuki has a clue. The boy who saved her has a tattoo on his lower back of a crown and some flames. Satsuki would recognize it anywhere. Because she feels thankful towards her savior, she wants to find him again. To do this, she has returned to the beach and begins working at a beach cafe. At the cafe, she meets a very surly guy named Mitsuru. Satsuki immediately thinks he must be the one who saved her (he is so handsome and strong-looking) and she asks if he remembers her, but he is not receptive to her claims about the rescue. Satsuki is determined to figure out if Mitsuru is her savior, and she will figure it out if it’s the last thing she does!

Finally, we have an adorable story about a girl with a small complex. Well, rather, she has a big complex about a small thing. Her name is Eri, and she has a small… chest. She has done everything she can think of to increase her bust size, but nothing is working. Now normally, a small chest would not be such a big deal, but Eri has a really cute boyfriend who is known for his preference for girls with a large chest. Because she wants to please him, Eri has been wearing a very large padded bra. But now things are getting more serious between them, and soon he will be wanting to take off her shirt! What will Eri do?! She has been deceiving him. What will he do when he finds out she doesn’t have big boobs? Oh this is so humiliating!