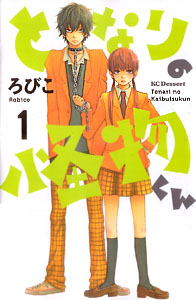 Those of you who have read this page for a while will know that I am pretty shallow and have very little willpower when it comes to series with cute boys on the cover. I am even worse when it comes to series that have a boy in a collar on the cover ^_^ Therefore, when I saw this book at the store, you know it was in my ‘buy’ pile very quickly. This cover is very cute. I love the flat stares of the characters, and there is something about the coloring style that I really like. I also love the artwork inside of the book. It is simple and very clean. The lines feel very… defined, and all of the screen tones are simple and precise. There are some authors who are scratchy and messy, and use thin lines that look unsteady or sloppy. In this case, the artwork feels delicate but precise. It is hard for me to describe it, but I really like it. This is volume 1 of a very fun series. It is not smutty, and leans more towards comedy than drama. And hey, this book comes with 4 adorable stickers! Score!

MIZUTANI Shizuku is our very calm, expressionless heroine. Our story begins when she delivers some homework and class notes to the boy who sits next to her in class. Shizuku has never actually met this boy because he got into a fight at school on opening ceremony day, and hasn’t returned since. Every day she sits next to an empty desk. Now she will finally get to see who should be in that seat.

What she discovers when delivering the homework is a very rough and rude guy. His name is YOSHIDA Haru. He looks kind of scruffy, has dark hair, and speaks in a rough way sometimes. Haru takes one look at Shizuku and runs away, leaving her somewhat dumbfounded. She drops off his schoolwork and leaves, only to be tackled by him from out of nowhere later on. He glares at her and accuses her of being some sort of spy for their school. Shizuku tries to explain that she was just dropping off his homework, but he doesn’t believe her at first. Surely she is there to tell him to come back to school!

But once Shizuku convinces Haru that she is not on a mission from their school, his attitude changes considerably. He suddenly gets all fanciful , wants to be her friend and even starts calling her by her first name right away. Wow, what a strange guy! Shizuku is not exactly thrilled by getting this unwanted new friend. She is busy studying. She has very strict academic goals, and can’t be distracted. Shizuku is a very serious person who doesn’t say a whole lot, and seems to be very unemotional. Back in elementary school, when their class rabbit died, Shizuku was the only one who didn’t cry. She just wanted to get home and study.

But now it seems that she has unwittingly made a new friend just through the simple act of delivering homework. Haru does not return to school (even though one of Shizuku’s teachers does hope she will get him to return) but he manages to kidnap Shizuku after school in order to hang out with her. Shizuku allows herself to follow along, but she is analyzing him the entire time. In spite of his rough appearance and habit of fighting, Haru is actually kind of sweet. He loves animals and they love him. But, in Shizuku’s opinion, he is also a bit of an idiot. It seems that even though he looks tough, he is actually very weak when it comes to dealing with people he considers to be his friends. He desperately wants friends, but has a hard time making them because he scares people. He was tired of scaring people, and in turn is scared himself of going back to school, so he has decided to quit. Therefore, when someone does want to be his friend, he is eager for it, even though they may actually be taking advantage of him.

Shizuku, in her usual emotionless way, explains to Haru that she isn’t really his friend, and she has no interest in him. When Haru reacts by calling her a bad person, spilling his drink on her, and leaving, Shizuku is left feeling very strange. She can’t get her mind off of Haru. Why is she reacting this way? She ISN’T his friend! Why does it seem like she lost something important? The look on his face at that time…

I really adore both Shizuku and Haru. Shizuku has a bit of a tsundere personality. She is cold on the outside, and seems to be very reluctant to be friends with Haru, but on the inside she is really starting to care for him. They both have things to bring to each other. Shizuku can help Haru interact with people and be a real friend to him, while Haru’s honest, pure, personality can drive away some of Shizuku’s cynicism.

They make a very odd couple. Haru has no problems saying whatever it is he feels, but he can be incredibly clumsy about it. And while Shizuku can be blunt about some things, when it comes to emotional stuff she alternates between acting genuinely happy to see Haru and completely covering it up by acting angry and irritable. She is still trying to figure out exactly how she feels about him. She is also unused to having friends. Of course, in her case it is because she never thought she needed them, but now Haru’s presence has suddenly become very important.

This is a funny and sweet story. I look forward to seeing them both develop as characters, and to see how their relationship proceeds. I really can’t wait for volume 2 🙂