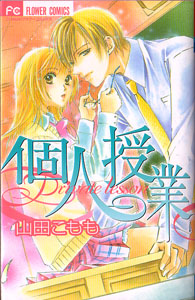 Like several other series I summarize on this page, Private Lesson is a teacher-student relationship story. When I deciphered the Japanese plot synopsis for this, I knew I had to buy it. I swear, Yamada Komo must have deliberately tried to throw in every shoujo manga plot device she could into this one volume. It is so awesomely cheezy and SHOUJOish! ^___^ The art style is very pretty, and the hero is very handsome. Of course, the story is ridiculously unbelievable, but that is nothing new for shoujo manga. Yamada-sensei must have enjoyed doing this one-shot story, because she followed it up with another teacher-student series that currently has 3 volumes and counting.

Michiru is a troubled high school student. She has just told a huge lie to all her friends, and she is about to be found out. They all think she has this fabulous boyfriend, but it isn’t true! Now they all want to meet him, and Michiru has no one to introduce! On the day of the big gathering with her friends, where she is supposed to show off her fabulous boyfriend, Michiru stands alone, in dread, waiting for her friends to realize she lied (they already are suspicious of her claim as it is). But things take a sudden twist when a gorgeous guy claiming to be Michiru’s “boyfriend” actually shows up and sweeps her off her feet! No one is more shocked than Michiru to see this handsome guy acting as her boyfriend. He knows about her lie, and tells Michiru that he wouldn’t want her to be found out by her friends. To make things look really convincing, he even kisses her there on the street! (shocking!) How does this guy know about her lie? How did he know where to find her? It’s all so strange!

After putting on quite the show for her friends, the guy drags Michiru off. She has all sorts of horrible ideas about where this stranger might be kidnapping her to, but again, she is surprised when he takes her to her own home! It turns out that his name is Satoru, and he is about to be Michiru’s new step brother! Michiru knew her mom was about to get married, and that she was getting a step brother, but her concern over her big lie was claiming most of her attention. Satoru is several years older than Michiru, and is super handsome. But wait! There’s more…. Michiru already knows Satoru from somewhere else, and she hasn’t even realized it yet. After some playful hints, Michiru realizes that Satoru is KAMIJOU Satoru… make that KAMIJOU-sensei, her teacher at school! She did not recognize him at all because at school he dresses down and looks very geeky. So begins Michiru’s romantic adventures with her brother… and teacher Satoru ^_^ Oh my, forbidden relationship x2!

This book contains 2 other stories. One is yet another student-teacher story. The other is a romance between two high school students who have known each other forever. He has some blackmail material on her, and uses it to basically make her his slave. Real feelings emerge when she finally resists being his toy. Both of these stories are pretty fun too! ^_^ Even though this book is just a giant pile of shoujo manga cliches, I still enjoyed reading it. Everything is so ridiculous and cute, and the cliches feel like old friends 🙂 I was fascinated by how many were packed into this one story. All that is missing is a crossdressing idol singer!