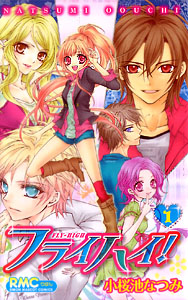 I picked this book up because I really like this author’s artwork. It is so clean and delicate, yet detailed and pretty. I like the way she draws eyes for some reason. The eyes are large, but they still manage to not look freakish, which often happens with shoujo manga. The guys she draws are really cute, too! The cover of this book is a bit busy and cluttered, and the heroine is a tad younger than I normally prefer to read about, but the story is extremely cute and fun, and the heroine is quite strong (though her family doesn’t seem all that bright, lol). This is the first volume of an ongoing series. Given that it is a Ribon title, it is non-smutty 🙂 This series focuses mainly on the conflict between the main character and the clash of wills than romance, but some romance does sneak in a bit at the end 🙂

This is the tale of TACHIBANA Meru, a 12 year old girl who has just returned to Japan after spending her life living with her father and undergoing intense martial arts training. You see, Meru’s father may be an expert all-around martial arts fighter, but he is not that bright. He likes to go off on training journeys, and once when he came home from a one such trip, he discovered that his wife had delivered his child, conceived during his previous visit home. Without even asking, he assumed the toddler was a boy, and vowed to train the child hard and make him into the strongest man ever.

Well, er, that child was Meru, and Meru is NOT a boy! However, she was raised by her father as a boy for many years. They actually did not even realize she was a girl until recently! Yes, this series is very silly and exaggerated 🙂 Anyway, upon realizing that Meru is a girl, they naturally had to return to Japan and to Meru’s mother. Meru is then immediately “girlified” by her mother (forced to dress in feminine clothing, given long hair extensions, etc) and enrolled in the local middle school. Meru’s mother has made Meru vow to not act manly or get into fights (this is tough considering Meru is an expert at 5 different types of fighting, and is an exceptional athlete!)

Meru is fine with all these changes in her life, and happily embarks on her new girl-life in her new school. However, things will not be that easy for her. Even though she makes her first friend very quickly (the friend is a very cute and feminine girl named Chiyo) Meru soon finds herself regretting her promise to her mother to not get into fights. Why? Because it turns out that her school is in crisis!

Meru’s junior high is ruled by three 2nd year students who are making everyone’s lives absolute hell. In this respect, they remind me a bit of the F4 from Hana Yori Dango. First there is the handsome, athletic fighter guy, Ichiya. He is the leader, and is quite handsome with his dark hair. But he is also mean, domineering, and sadistic. Next is a beautiful wealthy girl named Kazumi. She is a model and is very influential among the girls. Finally there is a boy named Riku. He is an evil genius. Together, this trio combines their unique strengths to terrorize the school. They forced the student council president (someone who normally has great power in the school) to quit. They do what they please on campus, ignoring teachers and skip their classes. They vandalize the school and force students to become their followers. What a horrible group!

Meru, who is naturally a fighter, is shocked by their bad behavior and the way they abuse the students. In a way similar to Tsukushi in Hana Yori Dango, she itches to stand up to these bullies and stop their reign of terror. But she has a serious handicap in that darn promise to her mother. Because of it, she can’t go all out and beat these villains up. But finally, Meru can’t take it anymore. She decides to stand up to the bullies, and she volunteers to become the new student council president, the direct enemy of the evil trio!

The battle is on! A fierce clash of wills begins as Meru struggles to save the school. She is constantly set back though, due to the antics of her devious enemies. They are not above doing anything they can to turn the school against Meru. Meru has to work hard to gain a following and think of a way to stop the terror. But what can she do, really? They keep coming up with really evil plans that make Meru’s efforts fail or backfire! Can Meru find a way to win? Will she ever get the trio to back down, or maybe even reform them? It seems impossible!

A wild card floating around through the story is a half-American boy named Ruka Miller. He is extremely pretty and smart. In fact, he is a genius that probably surpasses Riku of the Evil Trio. Ruka lived in America and at 11 years old, even attended an ivy league university! But a family accident forced him to return to Japan, and now he is stuck as a 1st year middle school student even though he is intellectually far more advanced. Ruka is very apathetic to the whole Meru vs Evil Trio situation. He really just wants to sleep, but everyone is so noisy, it disturbs his rest. While Meru’s determination and cheerful will impress Ruka, his boredness prompts him to side against her in the great battle. How could he! Meru admires Ruka’s smarts, and can’t believe he would turn on her like this! What will Meru do now!

The fact that Meru is saddled with the promise to her mother did drive me crazy while reading this book. Meru is so strong, I wanted to see her really take them on seriously. Instead, she is always forced to back down, or act weaker than she is. I got frustrated seeing the Evil Trio always getting away with more bad things. However, Meru still manages to execute some great maneuvers and she gains her followers through sheer force of will. Even though the trio is strong, she doesn’t back down. Her great sense of justice is fun to watch. While she may not be the smartest when it comes to school work, she is very strong when it comes to team work. She has a lot of energy and determination. I look forward to seeing her gain ground in the struggle and do not doubt she will eventually teach those bullies a lesson. And when a little bit of romance comes her way, it is very cute. I can’t wait for volume 2!