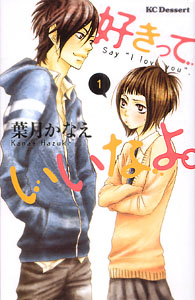 As with almost every series on this site, I picked up this series because I really liked the cover artwork. I ended up grabbing volumes 1 and 2 at the same time, and now I am anxiously awaiting the release of volume 3. This is a charming series. I really like the art style in it. It is clean and sort of stylish. Yes, all the characters are ridiculously skinny, and their bodies are sort of stretched vertical a little, but there is still something sort of quirky about how they look. I also really like the heroine’s hair style. In volume 1, it has that sort of wedge look that is rather unique for a shoujo heroine. Her hair grows out a bit in volume 2, but it is still cute. His hair is also kind of funny, and I admit, I tend to prefer heroes who have black hair like his. The first volume of this is mainly a high school romance with some comedy. Volume 2 is also funny, but it gets smuttier. I need to check and see if I have any other works by this author. I think I might, but I am not sure. At any rate, I intend to get more of her stuff in the future!

Our heroine, TACHIBANA Mei, is a loner. She is 16 years old and has never had a boyfriend. In fact, she has never really had any regular friends either. As a child, she was bullied a lot, and betrayed by her classmates. I am not exactly sure why they were so mean to her, he is not ugly or weird or anything. Perhaps it was because her personality was timid and quiet, so they felt they could get away with being mean to her. Anyway, this cruel treatment by her so-called friends when she was a kid has warped her personality and outlook on life. She doesn’t like other people, and believes she has no need for friends. She never talks to anyone at school, and never hangs out with anyone. Of course, this behavior seems strange and is misunderstood by her high school classmates, who now see her as weird. Once again, she has become the target of bullying. until now, she has taken the abuse with silence, but soon she is going to snap.

KUROSAWA Yamato is one of the most popular guys at school. He is known to be a player. He always goes out with new girls and flirts with everyone. He is not a bad guy, he just never seems serious about anything. But looks can be deceiving. Back in middle school, Yamato was not exactly popular. He was short and kind of dorky. He was even sort of rejected by the girl he liked (and never had the nerve to confess to). However, when his last year of middle school rolled around, he hit a growth spurt, and suddenly became tall and good looking. Everyone started treating him differently, and he suddenly started to become very popular. This popularity followed him into high school. Therefore, because he understands what it is like to not be popular, he has some sympathy for others in a similar predicament.

One day, Yamato’s best friend, Nakanishi, bullies Mei in front of him. Yamato had never seen or noticed Mei before, but her quiet reaction to the bullying catches his notice. Yamato’s friend is a total insensitive ass, however, buy his expression, Yamato obviously feels a bit sorry for Mei. He doesn’t join in on the bullying. But it doesn’t really matter. When Nakanishi’s antics finally push Mei’s patience and resilience too far, she snaps, lashing out with a powerful kick…. that hits Yamato instead! Oops. Fortunately, Yamato isn’t too hurt, but now his interest in Mei has really been piqued and it grows to something more than mere curiousity and pity. Mei is an interesting girl!

Even though she acts surly and anti-social, Mei is really a sensitive girl. She is not immune to Yamato’s charm, but she has no idea how to respond, or how to tell if he is being serious. After she kicked him, the guy seems to have become interested in her, and actually engages her in conversation! He even gives her a kiss! But how serious can you take a guy who is rumored to have kissed every girl in the school?

This series follows the contrasting personality types of Mei and Yamato as they become a couple. Yamato brings Mei out of her shell, and he stops acting like a player. The focus also shifts occasionally to some of Mei’s classmates and other people at their school, such as a large-breasted girl named Asami who has a complex about her chest, and hates that people always stare at it. No one seems to like her for HER. Then there is Chiharu, a cute and shy girl who is childhood friends with HAYAKAWA Kakeru, another guy at the school who is an even bigger playboy than Yamato. She has been quietly supporting him and loving him forever, but will he ever notice her as a girl? He sleeps around a lot, but his relationships aren’t very satisfying.

The relationship between Mei and Yamato is fun to watch. Yamato, even though he was a flirt, is a decent guy, and there is a reason other than his good looks for being so popular. He cares about people, and doesn’t pay any attention to the other people at his school who tease her and put her down. He likes her almost immediately, and isn’t afraid to show it. Mei has a bit of a surly personality. At times she acts tough and uncaring, but then she will get all girly and nervous. I also like how the series allows us to see what both characters are feeling (I prefer this to a strictly one-sided point of view) and I like the occasional nod to 70’s shoujo manga parody art style that the author uses to exaggerate the comedic situations.